Betsy DeVos’ nomination for Secretary of the U.S. Department of Education has reenergized some time-tested education policy debates, most prominently school choice. But DeVos also has brought more attention to the debate about the Common Core State Standards[1].

Debates about Common Core State Standards (CCSS) have dominated media coverage of education. Supporters tout the advantages of rigorous academic standards common across a majority of states, highlighting the leveling of educational quality to get all students ready for college-level work or postsecondary training. Opponents question the role of the federal government[2] in the development of state academic standards and argue these standards should be specific to and determined by parents and educators based in the states.

Despite some withdrawals and revisions, the majority of states are using CCSS. According to a recent Abt Associates analysis — published as part of a larger report — of the 46 states that originally adopted CCSS, eight states have officially repealed or withdrawn, 21 states have finalized revisions or have revision processes underway, and 17 states have not yet made any changes.

One of the most persistent questions in Common Core debate is about revisions made to CCSS. Did the revisions substantially overhaul the standards, as many CCSS critics called for, or were they more modest and minor, leaving CCSS mostly intact?

To address this question, the Abt team conducted a broad scan to identify any standards review processes that had occurred across the 46 states that originally adopted CCSS. We ultimately identified nine states – Alabama, Arkansas, California, Florida, Georgia, Mississippi, New Jersey, Ohio, and Utah – that had revised, or proposed to revise, CCSS but had not repealed or withdrawn from CCSS.[3]

We found a wide range of revisions in these nine states. Some were essentially wording or formatting changes, while others added new skills to existing standards or required new standards at different grade levels. We realized that in order to fully understand the revisions, we needed a summary of the types of revisions made instead of only the number of revisions.

To this end, we established a coding scheme for each type of revision in comparison to the original CCSS – described in Table 1 below. Our aim was to be as objective as possible, so rather than attempting to determine whether revisions added rigor or changed the substance of a standard, we simply classified each revision in every grade level in English/Language Arts (ELA) and math according to the categories described in Table 1.

On balance, the changes made to math and ELA standards in these nine states retained the original standards as adopted and focused on clarifying the standards already in place. 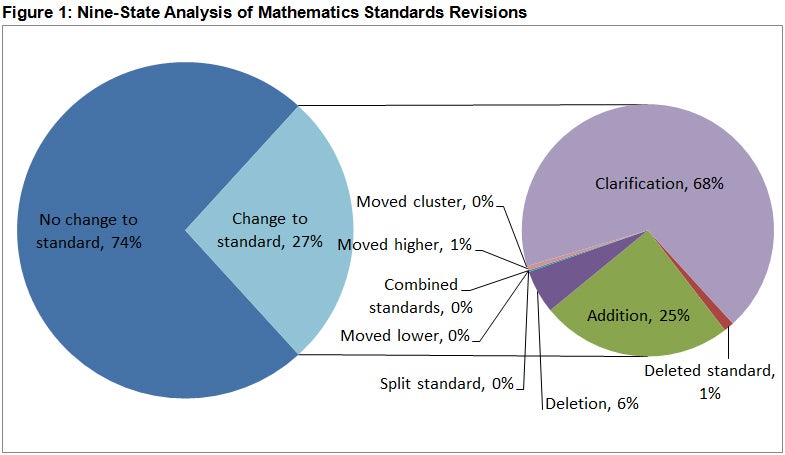 What to Make of These Changes – or Lack Thereof?

It’s not entirely surprising that these nine states kept the standards mostly intact, since we excluded states that had withdrawn from or repealed CCSS. Our sample is, therefore, likely skewed towards states that did not wholly disapprove of the standards. This comparison made sense for our original purpose – informing Massachusetts education leadership – but leaves us unable to generalize about all states’ changes to CCSS.

Still, there are some key takeaways. First, the most common changes were clarification changes, which seem to be intended to make the standards easier for educators to understand and use – not to alter the substance or content. It may also be that, with so much invested in professional development, curricula, and assessments tied to the Common Core standards, states were wary of making too many changes for fear of triggering expensive consequences – such as overhauls of district curricula, new statewide teacher training, large-scale textbook purchases, or changes to statewide standardized tests.

We saw that states were more likely to add skills than to delete them. With nearly 25 percent of the revisions for adding skills, it could be that states found CCSS not rigorous or comprehensive enough. It’s also possible that these additions represented states’ attempts to customize the standards, requiring students to know and be able to do particular things valued in their states.

Additionally, the federal policy context is an important backdrop. While many of the revision processes were taking place, between 2011 and 2016, No Child Left Behind (NCLB) waivers required states to have college and career readiness standards that met federal requirements – and Common Core State Standards did. States may have been reticent to deviate too much from the original version of CCSS for fear of losing their NCLB waiver – and as a result, their federal funding.

Several factors will affect the lasting impact of CCSS in the coming months and years.

As noted, the Trump administration has indicated its opposition to Common Core. But it’s unclear what, if any, action the administration might choose or even be able to, take at the federal level. Because the Every Student Succeeds Act specifies that states are permitted to select their own standards, the administration may settle on a hands-off approach.

More than five years have passed since many states originally adopted Common Core. It’s typical – and sometimes mandatory – for states to revise their standards every five to seven years. So, it’s likely that we’ll see at least 20 additional Common Core states complete revision processes in the context of the Every Student Succeeds Act. Considering these factors, it will be interesting to track future revisions to see how far states distance themselves from Common Core as well as how many new states opt to officially drop Common Core.

[1] The Common Core State Standards are a set of academic standards in mathematics and English language arts/literacy (ELA) that describe what a student should know and be able to do at the end of each grade from kindergarten through 12.

[2] Common Core State Standards were developed by a coalition of states. States were then provided with incentives to adopt them as part of a United States Department of Education-sponsored competition for Race to the Top funding. States were also required to have college and career-ready standards in order to receive an ESEA waiver.

[3] In summer 2016, Abt was hired to support the Massachusetts Department of Elementary and Secondary Education as it revised its Common Core standards. As part of the process to revise the CCSS, state leaders wanted to know: what had other states done to revise Common Core? We subsequently focused on states that, like Massachusetts, had not repealed or withdrawn from CCSS.