In most low- and middle-income countries (LMICs), many people lack access to quality health care. As governments work with partners across industries and sectors to provide better access to healthcare and respond to health crises, they should not forget an important partner: the media.

Poor health systems often are the result of low government spending on health and inefficient management of available resources. Any attempt to provide more accessible, higher-quality health care requires strategic frameworks and policies, which demands coordination among stakeholders within the system. The media can be a powerful advocate for this change.

Consider, for example, research on the impact of Nigerian newspapers on the government’s response to the Ebola Virus, published in the International Journal of International Relations, Media and Mass Communication Studies: As “an important ally in any public health situation, [the media] serves the role of being a source of correct information as well as an advocate…But before the media can take on that role, it needs to understand the [issues], policy and practices.”

With the appropriate support and training, and the right information, the media can help inform and educate the general population on the importance of health care reforms. They can advocate for and increase awareness of reforms through continuous and constant sensitization for policymakers, stakeholders, and civil society groups at the grassroots level. 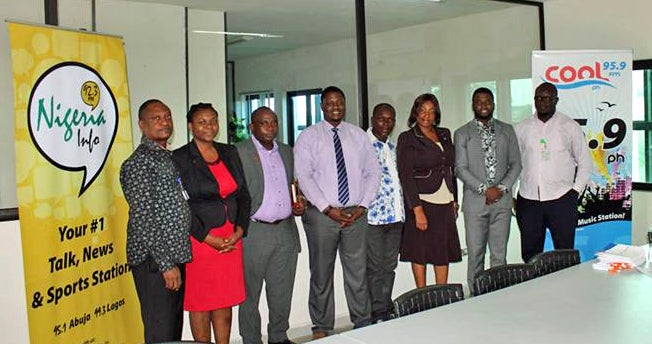 Members of Rivers State HIV and AIDS DRM technical working group (TWG) and leadership of the of Cool/Wazobia FM/Nigeria Info Radio Station Rivers state. The DRM TWG signed an agreement with the station to provide behavior change communication messages and facilitated on-air discussions and interviews on HIV. For all of these reasons, the USAID-funded, Abt Associates-led Health Finance and Governance (HFG) project encouraged the inclusion of media houses as members of the HIV and AIDS Domestic Resource Mobilization Technical Working Group (DRM TWG) in four Nigerian states. The HFG Nigeria team helped organize the DRM TWG, which also is composed of representatives from civil society organizations, the private sector, state government, donors, and implementing partners.

The working groups advocate for health financing reform in their respective states – specifically, mobilizing domestic resources through alternate sources and direct contributions to HIV and AIDS programming. In Rivers state, the decision to include the media in the DRM TWG resulted in a contract worth more than 19 million Naira – approximately USD $48,000 – between the state and a radio station. The station provided behavior change communication messages and facilitated on-air discussions and interviews on HIV.

Working Together to Prevent Inaccurate Reporting

Recently, the HFG Project supported the Cross River state government in developing a Health Insurance Bill, shepherding the bill through review processes and official signing. Some media outlets erroneously labeled this health insurance as “free health care.” Some might see this as a small mistake, but it could have serious ramifications and affect the people’s perspective on the reform. With an appropriate media strategy, the spread of inaccurate information could have been prevented.

A well-designed media-briefing strategy can prevent the publication of inaccurate information about health system reforms. Briefing materials for the media should be free of highly technical language so they can be relayed to the public in layman’s terms. Simply making the concepts more digestible will vastly improve the validity of the information provided by the media — enabling them to report quickly and accurately. The Health Finance and Governance Briefing Kit is a useful starting point.

There is no doubt that the media plays an important role in creating and shaping public opinion. For low-income countries to achieve targeted health care financing reforms, we must keep the public well-informed on the issues. With transparency and a well-informed media, the public can both support and hold their governments accountable. This engagement creates room for dialogue and an environment where the media can act as an advocate for both the government and the people.