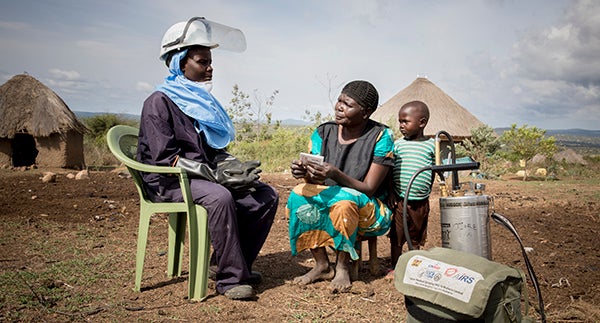 Malaria remains the leading cause of hospitalization and death in Kenya, despite being an entirely preventable and treatable disease. While enormous progress has been made in reducing cases and saving lives, much work remains to reach the global goal of eliminating malaria.

Despite being a proven malaria control strategy with sustained donor support, indoor residual spraying (IRS) has not been implemented in Kenya since 2012. Competing priorities, insecticide resistance and other challenges prevented people from being fully protected for more than five years. In Western Kenya – a region with 38% p. falciparum prevalence accounting for more than half of the country’s malaria cases1 – the lack of options created a crisis for people sleeping without full protection.

Between February 13 and March 18, Abt Associates – working with the U.S. President’s Malaria Initiative, Kenya National Malaria Control Program (NMCP) and the Ministry of Health – restarted IRS in Migori County in southwestern Kenya. The spray campaign successfully reached more than 212,000 homes and protected more than 900,000 people, including almost 15,000 pregnant women and 120,000 children under age five – vulnerable populations at a heightened risk of severe malaria symptoms and death.

What is Indoor Residual Spraying?

Indoor residual spraying is a proven malaria control strategy, but to understand how it works one must first have a basic understanding of mosquito behavior. After biting someone, a mosquito will rest on a nearby wall until it has digested the blood. If the person bitten carries the malaria parasite, that mosquito will then pass on the parasite to the next person it bites – often a neighbor, child or someone else living nearby. By spraying walls with a long-lasting insecticide that is safe for humans, mosquitos get a deadly dose and won’t survive to bite – and infect – another person. In this way, indoor residual spraying disrupts malaria transmission and reduces the mosquito population.

Before spraying homes, the PMI AIRS Project in Kenya collected more than a year’s worth of monthly entomological surveillance data. Teams of trained entomologists studied mosquitos in Migori for species composition, resting behavior, biting rates and insecticide susceptibility. These studies placed particular emphasis on how mosquitos behaved in Western Kenya to identify the best strategy to kill them.

What Did We Accomplish?

Community mobilizers informed household owners of the benefit of IRS and how to properly prepare their homes for spray. Spray teams were scheduled to arrive in a village one or two days after this mobilization message. The campaign lasted 30 days over five weeks.

Seasonal workers arrived at one of 28 operational sites before dawn, waking early to begin work in their communities by 7:30 a.m. At the operational site, storekeepers and site managers maintain a daily inventory to keep spray teams sufficiently supplied. They track spray performance and closely monitor the number of spray operators, structures found, structures sprayed and insecticide bottles used. This information helps managers properly allocate resources, guarantee supply and troubleshoot any challenges in the communities.

To promote gender equity, AIRS Kenya emphasized recruitment of women as seasonal workers with a target goal of 30 percent. Priority was given to women who met the requirements for each job category. In total, 48% of all seasonal workers were women. Gender awareness and sexual harassment training was incorporated in all trainings before the start of the spray campaign, and the project’s sexual harassment policy was posted at every operational site.

By the end of the campaign, the PMI AIRS Project successfully reintroduced IRS in Kenya for the first time in five years! The proven intervention protected more than 900,000 people, allowing them to rest assured that the mosquito population has died down and their burden of malaria has been reduced.

This year’s campaign has shown the community’s willingness to embrace IRS and the positive impact it has on reducing malaria cases.  Despite a five-year gap in coverage, this year’s campaign produced results – spraying 98% of households in Migori County – and protected vulnerable populations.

As we prepare for post-spray activities, the PMI AIRS Project will continue its monthly entomological surveillance and collaborate with local health facilities to evaluate the effectiveness of IRS as indicated by reduced mosquito populations and decreases in cases reported at health facilities. With sustained donor support we plan to expand IRS to more communities, extending full protection from IRS to more of the population at risk in Western Kenya. Our long-term goal is to reduce malaria cases, combine our efforts with other proven malaria-control strategies and be part of malaria elimination in Kenya.