Hurricane Ida made landfall in Louisiana on August 29th, 2021, on the 16th anniversary of Hurricane Katrina’s landfall.

After Katrina, nearly 850,000 people were rendered at least temporarily homeless, and more than 1,200 shelters were established across 27 U.S. states to serve them. In 2006, I conducted case study research on the technology processes at one such shelter in Shreveport, Louisiana. Lessons learned there may help us understand where to focus our technology response to Ida and other disasters, which are becoming more frequent as the effects of climate change increase.

Over four weeks, the shelter staff in Shreveport went from using a paper form developed by the Red Cross in 1979 to data entry in Excel to a quickly built web-based registration system and finally to implementation of pre-existing software as a service tool. While this may seem inefficient, it was highly adaptive to evolving needs. The shelter population changed from a high volume of largely self-sufficient residents to a lower volume of people with more difficult problems. The technology moved in tandem from supporting immediate response and crisis management to one that supports long-term recovery and the full breadth of human services.

Adaptablity is critical since each natural disaster is different. Louisiana was better prepared for Ida than for Katrina: stronger levees held in New Orleans, hard-hit Grand Isle was evacuated safely, and everything from generators to food and water to personnel were prepositioned. But Louisiana also had to contend with a spike in COVID-19 cases, making shelters potental superspreader sites.

Yet some components of the disaster dynamic remain the same, so the Katrina model of technology transformation has relevance. 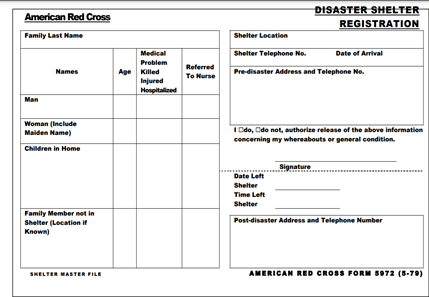 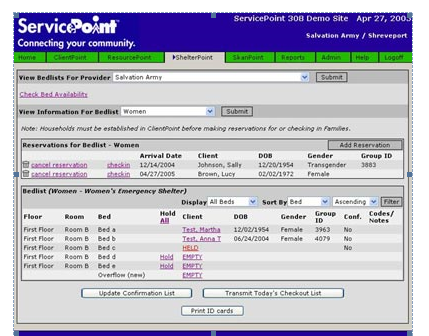 What We Can Do Today

Would it have been better to implement the case management tool right away? I think not. It would not have been the best tool in the early phase of registering thousands of people since the comprehensive intake to support case management often requires more expertise, training, configuration, and data entry. The shelter had no real need to know more about the individuals or connect them to other services, and the chaotic infrastructure and volunteer staffing couldn’t support it.

This was proved when Hurriance Rita struck just a few days after implementation of the case management system. To make room for new evacuees, the computers were dismantled and replaced with cots. The technical experts were asked to leave town to make room for as many evacuees as possible. Once the hurricane hit, electricity and connectivity were lost, and data staff were repurposed to sandbagging. In essence, a low-tech, crisis response mode was naturally reinstituted by the disaster despite the fact that all the technology infrastructure had been in place days before.

As Russell Dynes wrote in his 1970 classic Organized Behavior in Disaster:

“Rather than accepting the usual assertion about the irrational, inefficient behavior in disasters, it is possible … that the end result is more rational and, in time, more efficient since a community has restructured itself to meet a set of problems which its previous structure could not. Disaster planning should be made in the context of these natural processes set off by a disaster event; and it should facilitate these processes, not impose a model of human and technological efficiency which has little relationship to reality.”

That’s why technology advances has only partly improved disaster responses. In the earliest crisis response phase, the main goal is simply knowing how many people are in a shelter. High-tech solutions would be overkill. Then, during the final recovery period, case management is needed, which requires a personal, human response.

However, recent advances could suit the middle phases of the response, which need crowd sourcing, integrating data across systems, and restoring social ties and safety nets. In the Katrina shelter, the technology and people for facilitating family search and crowdsourcing was built from scratch. Today social media can crowdsource mobilization up front, and people can gather their own information and referrals much more easily. Similarly, advances in data integration standards could accelerate coordination efforts of services and data. The technology network—like personal and community networks--are neither fully coordinated nor complete chaos and thus well suited for the environment in the middle phases. This is where well-meaning technologists should focus their efforts.