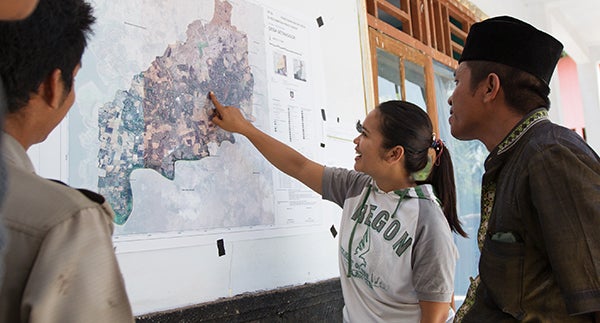 Indonesia is composed of 17,000 islands made up of wetlands, rugged terrain, rural villages, and dense cities, and has a contentious and costly boundary dispute problem. Overlapping land claims and confusion about administrative boundaries and jurisdiction frequently lead to conflict. Land features and oral history preserved theoretical boundary information for hundreds of years, but both have proved inefficient and increasingly unworkable in the modern era.

What happens when two villages both claim the same resource? To which village does a hamlet on a vague border belong? How can a country of 83,000 villages—only 5 percent of which are formally mapped—unlock, manage, and preserve the full value of its land and natural resources?

The answers to these questions impact village funding, service delivery, and negotiations with investors. Under the Millennium Challenge Account-Indonesia’s Participatory Mapping and Planning Projects (PMaP) 1 and 6, Abt Associates worked with more than 10,000 village representatives to map boundaries across hundreds of villages using community-based methodologies, high-tech mapping techniques, and an in-depth understanding of Indonesia’s rapidly changing legal and institutional framework.

Bringing Diverse Voices to the Table

PMaP’s 21-step boundary-setting process—designed by Abt—broke new ground by recognizing participation as a necessary component to solving local border conflicts. The resolution process prioritized inclusiveness, bringing young people, marginalized groups, and women to the same table as village leaders to make decisions on village boundaries and investigate the geographic and cultural histories of their villages.

Looking ahead, village participation meetings will present an opportunity for village leaders—who are typically tasked with resolving boundary disputes between village members—to consult with a broad group of villagers and build relationships and forge agreements that will reduce the likelihood of future conflict. These meetings and project outcomes will ultimately help determine investment priorities for villages and the distribution of government funding.

While stakeholders on the ground worked together, drones took to the sky, allowing villages to identify nearby roads and cultural and natural resources. Natural landmarks—like waterways, swamps, or forests--evolve over time, making them unreliable markers for permanent boundaries. GPS coordinates, satellite images/maps and physical boundary pillars enable leaders to establish a concrete record of their land for legal confirmation, which will lead to consistency for future generations.

Success by the Numbers

Abt’s PMaP projects worked in 12 districts and 23 sub-districts and legalized village boundaries for a total area of 381,066.57 ha. In total, the projects have helped community leaders in Indonesia map 287 villages, produce more than 800 maps, and resolve dozens of boundary disputes and conflicts. Over the course of PMaP-6, 98 percent of the demarcated boundary segments under review achieved inter-village agreement, while the collaborative VPTs identified 2,181 critical cultural and natural resources.

Abt’s PMaP work set a foundation for spatial certainty and sound land-related planning and investment in Indonesia. It also received buy-in from district governments, which committed to expanding village boundary-setting practices to other sub-districts. Increased spatial certainty is enabling increased green investment—supported by MCA-Indonesia—as investors face fewer logistical challenges to working in the region. With new inter-village partnerships and mediation skills, villages across PMaP districts are equipped to negotiate and position themselves for new opportunities and growth.

Focus Areas
Governance & Justice
Decentralization, Transparency & Institutional Effectiveness
Capabilities
Technical Assistance & Implementation
Regions
Australia & Asia Pacific
Jump Forward
Work With Us
Ready to change people's lives? We want to hear from you.
We do more than solve the challenges our clients have today. We collaborate to solve the challenges of tomorrow.
Link