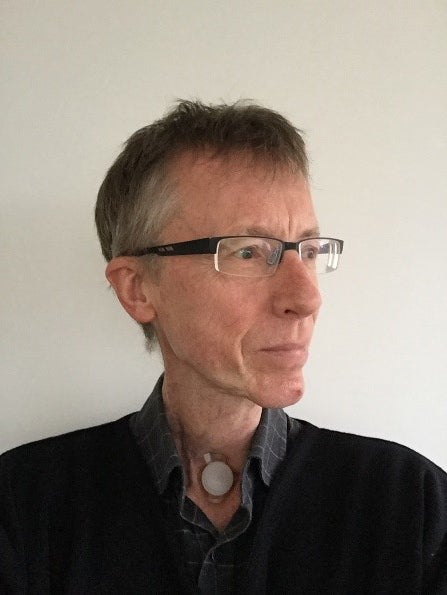 Graham Teskey is the Principal Global Lead for Governance for Abt Associates, based in Canberra, Australia. Before joining Abt, Graham was the Principal Governance Specialist for the Australian Government’s Department of Foreign Affairs, where his role was to advise DFAT on its governance and public sector programs within the aid program. Prior to moving to Canberra Graham was Senior Adviser and Head of the Governance and Anti-Corruption Secretariat Governance at the World Bank. Before joining the World Bank, Graham spent 16 years with DFID and enjoyed postings to Fiji, Kenya and Uganda. His last two DFID Senior Civil Service posts were in London as Head of Africa Policy Department and Head of Governance and Social Development.

He began his career as an economist in the Central Planning Office in Fiji, which was followed by appointments in the National Planning and Statistics Office in Vanuatu, in Rukwa region in South-West Tanzania with NORAD, and a lectureship teaching development studies at the University of Bradford in the UK.  In late 2012 Graham established the informal international ‘Community of Practice’ on Thinking and Working Politically, which Graham still chairs. Part of the inspiration for establishing the CoP was the Coalitions for Change program in the Philippines, which demonstrated the power of collective action. Graham is on the Board of the Commonwealth Association of Public Administration and Management, and degrees in economics, urban planning, and business administration.

What experience (personal or professional) has had the biggest impact on your career in governance?

This is an easy question to answer. There was no one single event but a growing doubt about the explanatory power of mainstream economics. The first 12 years of my career I was an economist (I studied economics at university), first in the Central Planning Office in Fiji, then in the National Planning Office in Vanuatu, then I taught economics at a university in the UK. I then joined DFID to head up the UK’s program in the Pacific, again as the economist. But I was increasingly aware that the approaches we used and—most importantly—the assumptions we made just did not, well, correlate to what was happening on the ground. Economics has many strengths and offers many insights but it was just not very good at explaining why things were actually as they were rather than what we thought they should be. 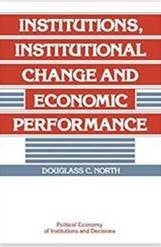 Just before I left Fiji for the second time in December 1995, DFID London called me and said there were no vacancies in the economists’ cadre, but if I wanted to join the brand new Governance and Institutions Department I could do so in January 1996. Intuitively this felt right – I had just read Douglass North’s ‘Institutions, Institutional Change and Economic Performance’ and it made a huge impact on me. North had just won his Nobel Prize and institutions were the flavour of the month. His analysis seemed so persuasive – institutions were the drivers of individual and collective behaviour. Some of these institutions were formal and rational, as economics would suggest, but many were not. The opposite!

So I joined GID and have felt in the right place ever since. There has been a huge growth in the literature on what was initially referred to as the New Institutional Economics (NIE), and today it is seen as mainstream. All the great thinkers and writers on institutions are household names in development (and arguably the most influential): Frances Fukuyama, Lant Pritchett, James Robinson, Darren Acemoglu, Matt Andrews, Mushtaq Khan, Mick Moore, David Booth, Brian Levy, Dani Rodrik, etc.

What makes the work so fascinating is trying to put these ideas into practice.

What do you see as the two to three top trends that will impact the global governance agenda in aid and development over the coming decade? And how do you think it will change (or not change) the way aid projects are implemented?

The re-emergence of the role of the nation-state is the first. Not that the state ever went away in most parts of the developing world. But there was a movement in the 1990s and 2002 to the idea of a ‘post-modern’ state – one that pools its sovereignty with others to achieve greater security, trade or international influence. This, of course, was most exemplified by the EU. But this trend is crumbling as issues of identity seem to be trumping issues of material interest. From a governance point of view this is worrying. First it means that the world is becoming more ‘Hobbesian’ – privileging force and the projection of power in pursuit of narrowly defined national interests (setting one state against another), and, second, it means that as a result of privileging identity, different groups within society are set against each other.

We see this very clearly in the US and the UK. I worry that we are also seeing its growth in Australia. Why does this matter? Well, in governance, there is this persuasive idea that, for a state to be a functioning, effective state, it first has to be a nation. This means that all citizens have to feel themselves to have a stake in that nation, and a voice. Governance people refer to this as one coherent political community. It is well documented that without a political community it is not possible to have meaningful political accountability, and a functioning democracy requires functioning political accountability. So this contemporary trend to privileging difference of identity above commonality of interest I find very worrying.

For development, this means we have to be particularly aware of the inequality (income and social) and ensure that our focus on inclusion is more than rhetorical. It is this inclusiveness that is arguably the single most important normative aspect of our work today.

Big question. Governance is learning—still—to present itself as not only a sector, such as public administration, anti-corruption, or law and justice, but as a way of thinking about development. This ‘way of thinking’ has been tricky to explain in simple terms. We cannot rely on the language and discourse of political science, as to talk about political settlements and path dependence is just as mysterious as is the economists’ neo-classical endogenous growth theory.

We practitioners have struggled to find a simple, intuitive way to catch the importance of institutions in development. My own preference has long been to discuss the role of interests and incentives in influencing human behaviour. This appeals to economists as it overlaps with behavioural economics and so-called ‘nudge theory’, and normal people know what these terms mean. But even so, only modest progress has been made.

More recently, however, the umbrella term is ‘thinking and working politically’, and this movement (if I can call it such) is making in-roads. Sector colleagues see immediately the importance of thinking not only about what is technically desirable in their sector, but what is politically possible too.  What they want (sometimes) is advice on how to judge ‘what is politically possible’. How do we know? This working together takes time as all professions see themselves as High Priests of something or other and don’t want to let others in.

So governance colleagues have to be supremely modest (something we are not very good at) and offer ourselves as helping, but by no means having the answers. We need to demonstrate that, first and foremost, we are about improving development outcomes. And the more I think about it the more important it is to think and work politically at the three critical stages of development:

These ideas are captured in the following: 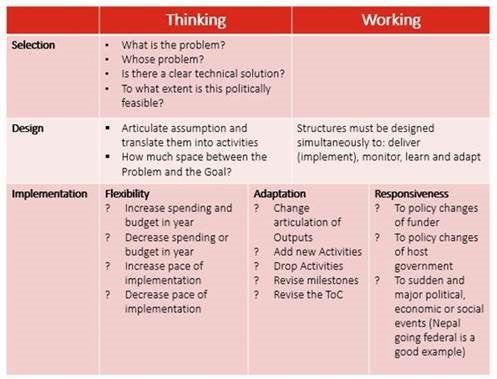 You ask what is working. At the moment, only bits of this agenda – and it depends on the authorising environment, what the donor lets the contractor do. I have found that DFID get this rather more than DFAT do – but in DFAT it all depends on the in-country environment.