Mexican citizens are so used to dealing with corruption that any efforts to combat it may seem futile. At Abt Associates, our Mexico-based communications experts figured out how to get the public’s attention and support with innovative messaging and storytelling. Under the U.S. Agency for International Development (USAID)-funded Mexico Economic Policy Program (MEPP), we launched a seven-step package of communications initiatives.

First, we used humor to get people’s attention in that most common of areas: public bathrooms. At an event attended by 100,000 people at the country’s largest convention center, we plastered a message on bathroom mirrors: “Si te vas a arreglar con alguien, que sea con tu reflejo.” (“If you’re going to make yourself look good for someone, it should be your own reflection.”) In Mexican slang, “arreglar” refers both to caring for one’s appearance and to negotiating.

The one-liner was one of many tongue-in-cheek anti-corruption messages MEPP posted during the event on multiple platforms: digital screens, T-shirts, tote bags, travel cups and apples. Yes, apples. MEPP gave more than 5,000 pieces of fruit to delighted attendees at Latin America’s largest business event, each with a sticker advising: “Si vas a dar mordida, que sea algo sano.” (“If you’re going to take a bite, make it something healthy.”) Every Mexican knows that a mordida is not only a bite, but also a bribe.

We generally avoided standard approaches--radio and TV announcements and press conferences—in favor of targeted strategies. To develop an entrepreneurship program for public university students, we posted ads in university metro and bus stations. The ads drew 350 applications from groups representing more than 700 interested individuals. To reach the public, we created celebrity videos that went viral, showing gas stations cheating customers by overcharging them and the bureaucratic odyssey needed to get a leaky tap fixed at a public park. For oil giant Pemex’s internal messaging on its code of conduct training, we sent videos by company email and put posters in communal office spaces. More than 100,000 employees are now expected to take the course. To ensure data collection for a regulatory improvement indicator, we gamified a survey that collected every bit of the needed information from civil servants in each of Mexico’s 32 states. 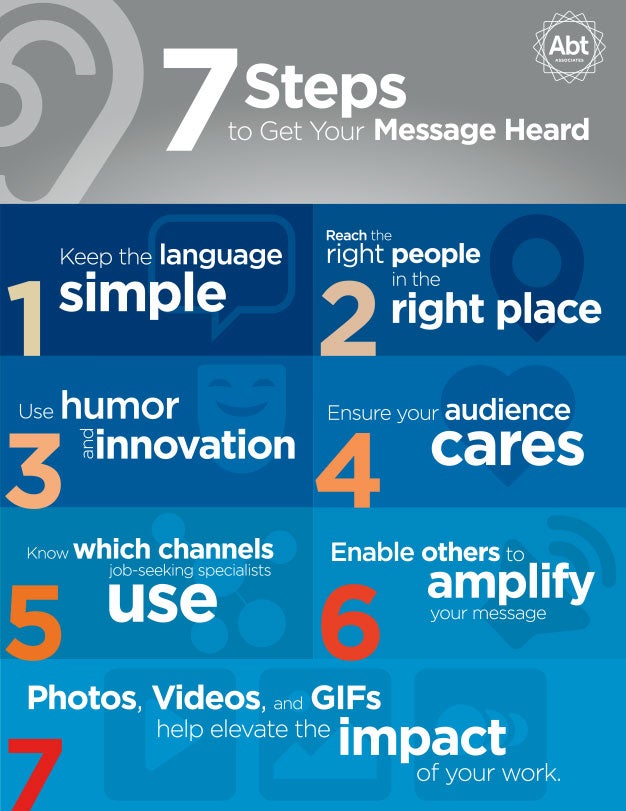 To amplify our message, we developed the first data journalism diploma in the country so that reporters would know how to use the data MEPP collected. Former graduates have reported on massive corruption scandals, and USAID is getting ready to expand the diploma program to border states.

Throughout all these initiatives, our messages used simple language instead of experts’ jargon in videos and GIFs so the public—and legislators, governors and civil servants—could understand our goals and why they were important. MEPP also bought a camera for our team so we could have pictures to humanize programs. Photos jazz up otherwise bland reports and provide grist for videos and GIFs.

For something abstract and seemingly intractable like corruption, communication is critical to increase understanding and expand support. Imagination and innovation have proven key ingredients for an attention-getting, effective communications strategy. Through MEPP, Abt’s creativity has helped combat corruption and inspire citizens to engage with their government.

Focus Areas
Governance & Justice
Decentralization, Transparency & Institutional Effectiveness
Capabilities
Digital Transformations
Communications & Behavior Change
Technical Assistance & Implementation
Regions
Latin America & the Caribbean
Jump Forward
Work With Us
Ready to change people's lives? We want to hear from you.
We do more than solve the challenges our clients have today. We collaborate to solve the challenges of tomorrow.
Link