This statement sets out actions taken by the Abt Australia and Abt Britain Corporate Group (“the Group”) to assess and address modern slavery risks in its global operations and supply chain for financial year starting 1 April 2019 and ending 31 March 2020, pursuant to s54(1) of the Modern Slavery Act 2015 (UK) and the Australian Modern Slavery Act 2018 (Cth).

The Group is wholly owned by Abt Associates Inc. (F.I.D. 04-2347643), a company incorporated under the laws of the Commonwealth of Massachusetts and registered in the State of Maryland in the United States of America (collectively referred to as “Abt Associates”).

Abt Associates Australia Pty Ltd and its Australian reporting entities are collectively referred to as “Abt Australia”. A joint statement has been prepared because these entities use the same policies and processes, operate in the same sector and have shared suppliers. This also applies to the other Australia-based and overseas entities that Abt Australia owns or controls.

Abt Associates is defined by its mission to improve the quality of life and economic wellbeing of people worldwide. We are a mission-driven, global leader in research and program implementation in the fields of health, social and environmental policy, and international development. Known for our rigorous approach to solving complex challenges, Abt Associates is regularly ranked as one of the top 20 global research firms and has been recognised as one of the top 40 international development innovators.

Our global staff of over 3,600 work in more than 60 countries and includes national and international experts who are recognised for their knowledge, innovative research techniques, and insightful analyses and recommendations.

The Group’s operations include direct employment of workers, predominantly in professional services roles, with provision of program management services and specialist advisory services including but not limited to: governance and public sector reform, health services, policy and systems, research monitoring and evaluation, and gender equality and social inclusion. As part of our program management services, we may manage the following on behalf of our clients: procurements (including of technical assistance), grants, delivery of remote health services, subcontracting of construction projects, security and/or subcontracting of local security services, impact investing, behavioural change initiatives, and more.

Abt Australia’s home office locations are based in Australia, with overseas operations in the Asia Pacific region. Abt Britain’s home office is based in the United Kingdom with overseas operations in Asia, Africa and Eastern Europe. The Group’s supply chain is complex and dispersed across these regions. In addition to standard procurement required to support a professional services firm, the supply chain also consists of downstream partners (subcontractors and grantees) engaged to support delivery of international development programs overseas. The diverse supply chain consists of NGOs, research institutions and universities, consultancy companies, church partners, local in-country suppliers, self-employed consultants, travel and accommodation providers, security firms, suppliers of medical and IT equipment and consumables, and more.

Abt Associates is a signatory to the United Nations Global Compact (UNGC), and supports the Ten Principles of the UNGC on human rights, labour, environment and anti-corruption, including the elimination of all forms of forced and compulsory labour (principle 4), and the effective abolition of child labour (principle 5). We are committed to continual improvement so that our policies, procedures and processes remain effective with the aim to prevent modern slavery.

Abt Australia introduced its Child Protection Policy in 2016 and its Prevention of Sexual Exploitation, Abuse and Harassment Policy in June 2020. While these policies do not directly address modern slavery, they do address common vulnerabilities and power imbalances that are relevant to combatting modern slavery.

During this reporting period, Abt Britain introduced its own Safeguarding and Child Protection Policy (contextualised to its operations), along with its Modern Slavery and Human Rights Abuses Policy and expanded its ethical training package to include a module on recognising and reporting human rights abuses such as modern slavery and human trafficking. The ethical training package is provided to all staff upon induction, and then completed every two years after that.

Abt Australia intends to also introduce its own Modern Slavery Policy based on the UN Guiding Principles on Business and Human Rights (UN Guiding Principles), being the global standard for preventing and addressing business-related human rights harm.

Both Abt Australia and Abt Britain’s Safeguarding Codes of Conduct prohibit personnel from: engaging in any sexual relationships with beneficiaries of assistance (as they are based on inherently unequal power dynamics); and hiring children for domestic or other labour which is inappropriate given their age and developmental stage, which interferes with their time available for education and recreational activities, or which places them at significant risk of injury. These standards of conduct contribute towards a safer environment for all, reducing the risk of sex trafficking, and the worst forms of child labour.

In addition, to encourage reporting of any suspected modern slavery cases, personnel have access to protections under Abt Australia and Abt Britain’s Whistleblower Protection Policies, and can report anonymously through the Ethics and Compliance Helpline. Personnel also have access to country specific focal points to report safeguarding incidents; and all Abt Britain personnel are informed of the Foreign, Commonwealth & Development Office (FCDO) reporting channels as well.

During the reporting period, Abt Australia and Abt Britain began preparing to conduct a group wide risk assessment: resources were dedicated to understanding key risk factors related to modern slavery, including the ILO indicators of forced labour, and private sector best practice in managing and mitigating the risk of modern slavery practices in operations and supply chains.

This culminated in a group wide assessment of the risk of modern slavery practices in our operations and supply chain. While the assessment was conducted after the reporting period, it is detailed in this statement to provide transparency about the Group’s risk profile.

The Group’s risk rating of modern slavery practices in its operations and supply chain are outlined below. Please note that the inherent risk rating does not account for existing controls such as the safeguarding and child protection policies and measures, and procurement due diligence processes.

Prevalence of modern slavery in the Asia Pacific region – the region accounts for 62% of the global estimate (even though it only accounts for 56% of the world’s population). It also has a high prevalence of forced labour compared to other regions. Abt Australia has programs in Papua New Guinea, the Philippines, Timor-Leste and Indonesia where the estimated prevalence of modern slavery victims per 1,000 population are 10.3, 7.7, 7.7, and 4.7, respectively. Australia and the United Kingdom rates are 0.6 and 2.1 for every thousand people in the country, respectively. [2] 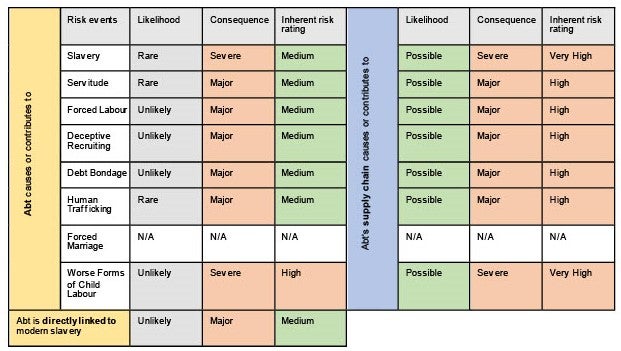 PROCUREMENT AND GRANTS DUE DILIGENCE

As identified above, the risks of modern slavery practices are highest in our supply chain. We have in place baseline and comprehensive due diligence assessments when engaging downstream partners as part of our procurement and grants management. As we develop and introduce a formal control framework in response to the Group’s modern slavery risk assessment, we will review and amend the due diligence framework accordingly. Currently, our baseline measures include:

As part of the formal control framework to be developed and introduced in response to the Group’s modern slavery risk assessment, we intend to introduce an incident management procedure and remediation action plan for modern slavery, detailing the processes to enable mitigation and remediation to the extent that we caused or contributed to modern slavery and have control over the incident and its causes. The process would sit alongside current mechanisms which would strengthen any formal control strategies implemented, including:

The Crisis Management Team was activated on 3 February 2020 to protect the health and safety of our workers, not only in Australia and Britain, but also in our overseas program locations. Acknowledging that there are various reasons why some workers may be or become more vulnerable to modern slavery due to the pandemic (such as inability to safely return to home countries, loss of income or fear of loss of income, etc), a variety of measures were put in place, including:

Where possible, our overseas health programs have pivoted to support the local response to COVID-19, including facilitating the procurement of protective equipment.

Abt Australia and Abt Britain measures the effectiveness of actions taken to combat modern slavery by measuring:

As Abt Australia and Abt Britain introduce other control measures in response to the Group’s Modern Slavery Risk Assessment to identify, aim to prevent, mitigate and account for how the group addresses modern slavery, we expect that other key performance indicators will be introduced to measure the effectiveness of our actions.

In addition, our internal audit department provides independent assurance that our risk management, governance and existing internal control environment are operating effectively, and will similarly provide a measure of effectiveness as future modern slavery policies and processes are introduced.

Having conducted a group-wide risk assessment to ensure we take an informed approach towards combatting modern slavery, we intend to:

This statement was approved by the boards of Abt Associates Australia Pty Ltd, Abt Britain Limited and each of the reporting entities they own and control, on 6 October 2020.