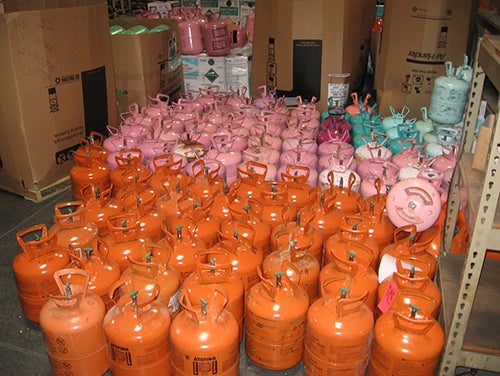 Used refrigerant cylinders
Photo credit: Ward Atkinson, consultant to Abt Associates . Air conditioning and refrigeration systems in the United States operate using a range of synthetic and natural refrigerants. Many synthetic refrigerants deplete the ozone layer and contribute to climate change. Some of these refrigerants such as hydrofluorocarbons, or HFCs –  have effects on climate change that are several thousand times stronger than carbon dioxide.

Abt Associates’ staff assisted the U.S. Environmental Protection Agency in understanding how significantly these emissions impact the environment. To do this, Abt staff conducted an analysis to determine how much refrigerant – on average – remains in these cylinders when they are disposed. This analysis included a theoretical study that considered the physical properties of refrigerants and estimated how much refrigerant would remain in a cylinder under different pressure assumptions. The analysis also included an empirical assessment that involved measuring actual quantities of refrigerant in cylinders collected by a recycling firm. We also collected information from stakeholders in the field to understand cylinder disposal practices.

Using this information, Abt’s analysts estimated the impacts on the ozone layer and climate change that are attributable to refrigerant emissions from cylinder disposal.
Regions
North America