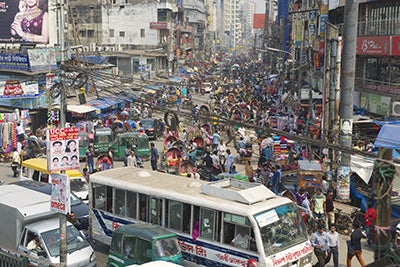 Urban growth in Dhaka, Bangladesh, is exacerbating congestion and air pollution in the city. However, the construction of a Bus Rapid Train (BRT) line in Dhaka, and the concurrent replacement of some existing buses with compressed natural gas buses, will result in air quality improvements.

The Asian Development Bank (ADB) hired Abt Associates to follow up a previous economic benefit analysis with one to quantify the public health benefits expected from the Dhaka BRT project and to assess potential changes in greenhouse gas emissions. The Abt study is the first effort to monetize the potential public health benefits of the BRT line in Dhaka.

Abt’s approach examined two health endpoints that might result from reduced exposure to air pollution: 1) premature mortality in children and adults, and 2) chronic bronchitis in adults. Additionally, we estimated the changes in specific greenhouse gas emissions – including carbon dioxide and methane – expected to result from the BRT project.

Abt’s analysis found that the construction of a BRT line in Dhaka, Bangladesh, will result in air quality improvements that will, in turn, bring both public health benefits and reductions in overall greenhouse gas emissions.

We estimated a reduction in greenhouse gas emissions of 434,000 metric tons of carbon dioxide (CO2) equivalents for the entire BRT project evaluation period. These changes will be driven mainly by replacing a portion of the existing diesel fleet with large-capacity, cleaner compressed natural gas buses.

Combining the reductions in ambient air pollution with the concentration-response functions, background incidence rates, and population estimates, we estimated 798 fewer premature deaths for adults over age 30, 55 fewer premature deaths for children under age five, and 819 fewer cases of chronic bronchitis in adults over age 25. We did not have information to estimate premature mortality benefits in those aged 5 to 30. As expected, the health benefits increase over time. This is not surprising, because both emissions reductions and the population benefitting from these reductions are expected to grow between 2014 and 2044.