Improving Maternal and Child Care/Health Systems in the Dominican Republic 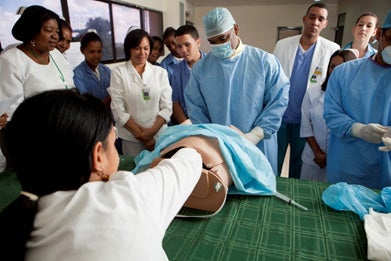 The Maternal and Child Centers of Excellence project, led by Abt Associates for USAID, addressed a joint goal of USAID and the Dominican Republic: Improving the health status and lives of the people of the country by increasing their access to quality maternal and child care, with the ultimate objective of reducing maternal and child morbidity and mortality. The project, implemented from February 2009 through February 2014, focused on developing Centers of Excellence with integrated health systems to improve the quality of maternal and child health services in ten strategically selected hospitals and three Provincial Health Directorates (DPS). By disseminating their lessons learned and best practices, the centers are contributing to the country’s achievement of equal access to sustainable and quality services for every mother and child. The idea to develop Centers of Excellence throughout the Dominican Republic was proposed to create a group of outstanding performers with the capacity to individually achieve tangible maternal and child health outcomes. The Centers of Excellence approach seeks to create synergy between the participating health facilities, promote exchange and healthy competition among them, and establish a common conceptual framework developed in joint participation between facilities and the project.   The project relied heavily on in-country expertise – both institutions and personnel – with minimal international short-term technical assistance. Abt Associates partnered with several Dominican institutions, including the Universidad Instituto Tecnológico de Santo Domingo (INTEC), Sistemas y Procedimientos, S.A. (SISPROSA), and Demographic and Social Studies Consultants — DR (CESDEM) as well as with prestigious international partners, including University CES in Medellin, Colombia and Cultural Practice in Maryland.   The Centers of Excellence:

The Centers of Excellence project helped to improve the quality of care and reduce maternal and neonatal mortality in 10 hospitals, which attend to 23 percent of births nationwide. During its implementation project-supported hospitals reduced maternal deaths by 46 percent and infant deaths, mostly neonatal, by 42.1 percent. These results are a product of the joint efforts of the Ministry of Health and the Project.   In April of 2013, the MOH took an important step to institutionalize this system by issuing an Administrative Decree to incorporate the Centers of Excellence system as the official model to be utilized for quality assurance. In August of 2013, three institutions were recognized as the first Centers of Excellence by the MOH, which marks an important moment in progress towards the institutionalization of this system and its transformation to a routine program executed by the Vice Ministry of Quality Assurance.   Apart from the results obtained, the exceptional part of this initiative is the decision of the Dominican government to expand the Centers of Excellence model in six additional hospitals through resources from the Inter-American Development Bank. The scaling up of this model would serve to benefit two-thirds of the country´s births. The transition of a project initiative to a public health program has become a reality that will allow the benefits to be extended to many more Dominican families.   Success in the Dominican Republic: A Collection of USAID/Maternal & Child Centers of Excellence Success Stories Final Report of the USAID/Maternal & Child Centers of Excellence project