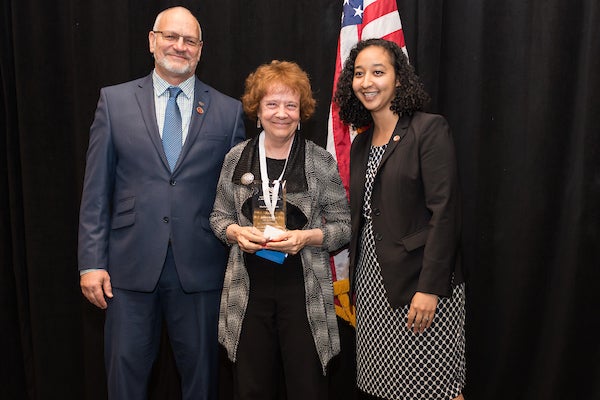 Marge Wherley (center) receives the 2017 Meritorious Service Award from the National Coalition for Homeless Veterans during their annual conference. Photo credit: National Coalition for Homeless Veterans. Improving assistance for families experiencing homelessness in Hennepin County, Minn., has been part of the mission for Abt Associates’ Marge Wherley, associate/scientist for Social and Economic Policy.

Prior to joining Abt, Wherley’s leadership and collaboration in housing services in Hennepin County led to the creation of Rapid Re-Housing, an intervention designed to help individuals and families quickly move from homelessness and return to permanent housing. In 2008, the U.S. Department of Housing and Urban Development invested $1.5 billion in replicating the model nationally, followed, in 2012, by the Department of Veteran Affairs. This model is now part of every Continuum of Care’s homelessness response system.

For her work, the National Coalition for Homeless Veterans (NCHV) recently honored Wherley at their national conference in Washington, D.C., with their Meritorious Service Award for her work to end veteran homelessness.

“I was surprised and honored by this award,” Wherley said. “I believe that Rapid Re-Housing is an essential strategy to end the crisis of homelessness for solo adults and families. It’s what people want and need: a clear focus on immediate access to housing.

“Once that is secured, people can decide for themselves what they want and need—and the supports are there to help them achieve their own goals,” Wherley said.

A Local Strategy is Adopted Nationally

The success of Hennepin’s Rapid Re-Housing in reducing the length of stay in shelter, increasing exits from homelessness to permanent housing, and reductions in recidivism captured the attention of federal funders and homeless service providers.

Wherley and other public and nonprofit staff and advocates took a new approach to helping homeless families achieve permanent housing. The Hennepin program helped families move out of shelter and into permanent housing through temporary financial assistance, landlord partnerships and a Housing First case management model designed to resolve the housing crisis. Today, this approach is one of the critical strategies needed to end homelessness.

“This award is well deserved. Marge ended up transforming the homeless assistance field and has contributed to ending homelessness for literally thousands of households over the past 25 years,” said Abt Associate Principal Associate and colleague Matt White.