Skip to main content
This page is optimized for a taller screen. Please rotate your device or increase the size of your browser window.
Watch a video of Jill Khadduri’s presentation at HUD Fifty years ago, on September 9, 1965, President Johnson signed legislation creating the Department of Housing and Urban Development (HUD).

Dr. Jill Khadduri, a Senior Fellow at Abt Associates and a former HUD staffer, commemorated this anniversary by writing a 98-page book chapter covering the founding of HUD and its evolution during the last 50 years. The book, published in October by HUD’s Office of Policy Development and Research, is titled “HUD at 50: Creating Pathways to Opportunity.” Khadduri worked at HUD from 1973 to 2000, through six political administrations.

Khadduri spoke at HUD in Washington, D.C. on Sept. 17 about the personalities, politics, and programs that shaped HUD since the agency was created. Her presentation examined HUD through the lens of its secretaries and was based in part on extensive interviews with some of their closest advisors.

HUD was created to address racial and economic segregation and poor housing conditions in America’s cities and the weak fiscal base that made it hard for cities to solve their problems. At the time, bad housing was seen as a reason behind the urban riots of the 1960s.

Khadduri’s history details how the HUD began as a replacement for the Housing and Home Finance Agency, an agency that did not have cabinet status and ran collection of disparate programs. Robert C. Weaver, an experienced housing administrator and civil rights leader, became the first Secretary of HUD and the first African American to hold cabinet rank. He was charged with creating a unified department that would have the capacity to address America’s urban crisis.

Over the years, HUD has evolved from an agency that builds housing for low-income renters to one that uses housing vouchers to give the most vulnerable Americans the ability to rent private market housing, Khadduri pointed out. HUD’s mission for providing housing assistance to the poor took on a new focus in the late 1980s when HUD was made the lead federal agency for addressing homelessness. At about the same time, enactment of the Low Income Housing Tax Credit gave states the primary role in the production of affordable rental housing.

Starting with the Model Cities program of the 1960s, HUD and its local partners have struggled to improve distressed urban neighborhoods. “We really don’t know what it takes to turn around a neighborhood,” Khadduri said, “or perhaps we don’t know how to assemble the resources. We know you have to do more than just build housing.”

Providing affordable housing in good condition is important, but so are high quality schools and access to good jobs, Khadduri said. Successive HUD secretaries have attempted to focus resources across federal agencies on this problem and have found it challenging. Major programs that affect the shape of cities and provide resources for low-income people — for example, the Urban Mass Transit Administration — are in other federal departments. 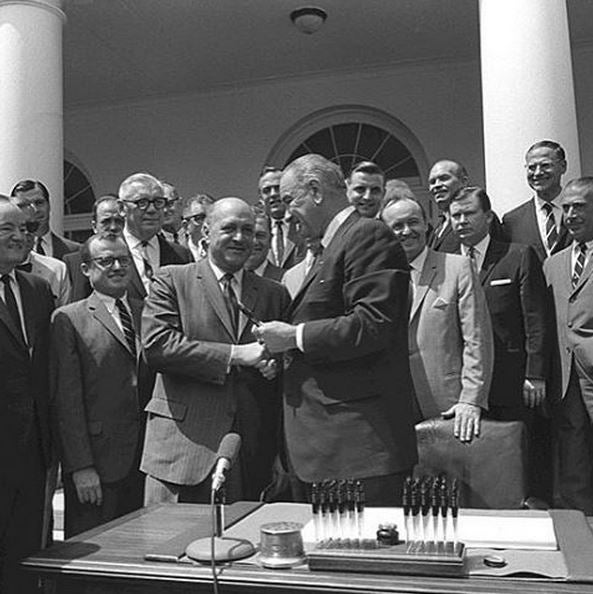 President Lyndon Johnson signed the Housing and Urban Development Act into law on Aug. 10, 1965, creating HUD as a “new and needed instrument” to confront the nation's housing and urban challenges. Robert C. Weaver (pictured shaking hands with President Johnson) – an experienced housing administrator and civil rights leader – became the first Secretary of HUD and the first African American to hold cabinet rank.
Photo credit: HUD Another challenge for HUD has been how to exert leadership in housing finance. Providing FHA insurance for loans to homeowners has been a major role for HUD from the start. FHA’s role in the market dropped with the growth of Fannie Mae and Freddie Mac, and HUD secretaries tried to use their authority as “mission regulator” to focus Fannie and Freddie’s activities on low-income borrowers and low-income neighborhoods. FHA insurance came back in the past decade as FHA continued to insure loans using established underwriting criteria while others reacted to the crisis by making it increasingly hard to finance home buying.

The Fair Housing Act of 1968 created a mandate for the HUD secretary to administer programs in a way that overcomes racially segregated housing. HUD secretaries have used a variety of approaches to implement that mandate. It may come as a surprise to today’s audience that George Romney, Nixon’s first HUD secretary, was very aggressive in his efforts to open up the suburbs to African Americans by building low-income housing outside traditional minority neighborhoods.

“You have to remember that the American political landscape was very different then,” Khadduri said. “Congress still had a ‘conservative coalition’ of southern Democrats and conservative Republicans, and liberal Republicans still existed.”

Khadduri started at HUD in 1973 when she joined the Office of Policy Development and Research. PD&R was created that year to strengthen the empirical basis for policy-making. By that time, it was becoming apparent that most of the urban housing stock was sound and that the central problem was how poor people could afford to pay the rent.

“We’re still struggling with that problem,” Khadduri said, “as the total amount of rental housing assistance has stalled at 5 million housing units, much less than the amount that is needed—for example, to prevent and end homelessness.”

Watch a video of Jill Khadduri’s presentation at HUD.