Every day, millions of America’s children struggle with hunger, and face very real challenges and barriers to healthy eating. In 2013, nearly 16 million children in the U.S. lived in food insecure households—those households where consistent access to adequate food is limited by a lack of money and other resources at times during the year. In 2014, about one in five children in America received help from the Supplemental Nutrition Assistance Program (SNAP), formerly known as food stamps.

Children’s development, health, and well-being depend on access to a safe and secure source of food.  Through SNAP, the National School Lunch Program (NSLP), and other national food assistance programs, millions of children are receiving the help they need to reduce hunger and increase access to healthful, nutritious food. Abt Associates is working with the U.S. Department of Agriculture (USDA) and others to analyze and evaluate several food assistance programs, helping them better meet the needs of millions of food insecure children.

“Abt Associates’ evaluations have provided policymakers with the evidence they need to make improvements in a range of food assistance programs,” said Susan Bartlett, Abt principal associate and an expert on food policy research. “Through our data-driven insights, we’re helping policymakers successfully fight childhood hunger and help children gain access to healthier food.”

As part of it many efforts to combat child hunger, the USDA—through its NSLP and School Breakfast Program—supports meals and snacks for millions of low-income children in communities across the nation.  And when school is out of session during summer, the USDA’s Summer Food Service Program (SFSP) helps feed 15 percent of the children who receive the National School Lunch Program.  Are there additional approaches to providing summertime food assistance to school-age children, including those who don’t have access to the SFSP? 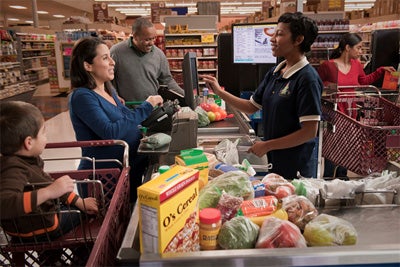 The results? Abt’s research team found a 33 percent decrease in the rate of very low food security among children, the most severe form of food insecurity, in the demonstration’s second year. Additionally, children in households receiving SEBTC ate more fruits and vegetables, whole grains, and dairy products, and had fewer sugar-sweetened beverages than in households that did not receive the benefit.

“During the summer months, many children may lose access to the free and reduced-priced school meals that they receive during the school year,” said Ann Collins, principal associate at Abt Associates and director of the evaluation. “Our analysis shows that SEBTC works, and can be a useful tool in addressing childhood hunger.”

In 2012, the $60 per child per month food benefit was provided to more than 66,000 children in 14 sites in Connecticut, Delaware, Michigan, Missouri, Nevada, Oregon, Texas, Washington and the Cherokee and Chickasaw Nations. Households were eligible for the special benefit if they lived in participating school districts and had children in grades pre-kindergarten through 12, and if they were certified for free or reduced-price school meals. After the SEBTC’s demonstrated success, FNS added two years to the evaluation. In summer 2013, approximately 20,000 children in six sites received either a $60 or a $30 monthly benefit amount and in summer 2014, more than 10,000 households received SEBTC benefits.

A provision in the Healthy, Hunger Free Kids Act of 2010 eliminated the need for families in high-poverty areas to submit applications for free or reduced-price meals. Known as the Community Eligibility Provision (CEP), this new option enables schools to provide free lunch and breakfast to all students. In turn, schools and local educational agencies are reimbursed for meals using a formula based on the percentage of students identified as eligible without an application.

Abt Associates was asked by the USDA’s FNS to evaluate the implementation and results of the CEP, and through collecting and analyzing data, found that the program is achieving its aim. Through the CEP, more low-income students are participating in the NSLP and the School Breakfast Program—and this is happening without the CEP adversely impacting school foodservice budgets.

“Having access to breakfast and lunch through school is an important part of the fight against childhood hunger,” said Chris Logan, Abt principal associate and study lead. “Our evaluation shows that the program is working, and that it is most popular where free school meals are most needed.”

The CEP was phased in over several years and became available nationwide during the 2014-15 school year. 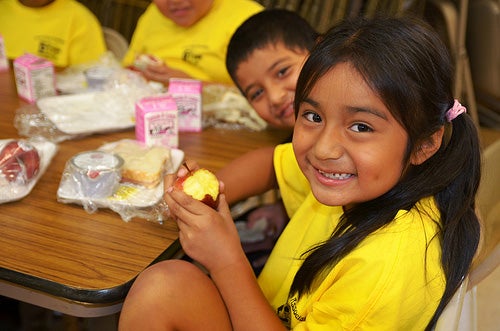 “Population dietary changes are generally small and incremental,” said Bartlett, the report’s lead author. “So increasing fruit and vegetable intakes by even small amounts may confer a health benefit.”

The USDA encourages schools to implement FFVP two or more times per week, and the researchers found that 94 percent of FFVP schools reported doing so. In addition, nutrition education and promotion messages about fruits and vegetables and about trying new kinds of foods were conveyed more frequently in FFVP schools than in similar schools not participating in the program.

Millions of low-income families, including children, rely on SNAP to meet their food needs. But food insecurity is more than not having enough food; it is also limited access to healthy foods. To test ways to improve consumption of fruits and vegetables, the USDA’s FNS implemented the Healthy Incentives Pilot (HIP). Through HIP, SNAP recipients received a financial incentive to encourage the purchase of fruit and vegetables.

The USDA turned to Abt to evaluate the effectiveness of HIP. Through its analysis, Abt found that HIP participants consumed almost a quarter of a cup more fruits and vegetables than non-HIP participants. This 26 percent increase in consumption over non-HIP participants is both statistically significant and large enough to be nutritionally relevant.

“Through our study, we were able to provide USDA with evidence that HIP was working and that people were making better food choices for themselves and their families,” said Bartlett, who led the study.

“Abt has decades of experience in developing and executing complex research around childhood hunger and nutrition,” said Mary Joel Holin, Abt Associates division vice president for Social and Economic Policy. “We’ll continue to look for ways to apply our expertise to the challenge of reducing childhood hunger.”

Focus Areas
Economic Well-Being
Reproductive, Maternal, Newborn and Child Health (RMNCH)
U.S. Food Security
Food Security & Agriculture
Health
Workforce & Economic Mobility
Regions
North America
Jump Forward
Work With Us
Ready to change people's lives? We want to hear from you.
We do more than solve the challenges our clients have today. We collaborate to solve the challenges of tomorrow.
Link