An Abt Associates-led family planning project in Jordan worked with a cancer foundation and four of the country’s 12 governorates on an annual campaign to increase early detection of breast cancer. The campaign, part of ‘Think Pink’ days in October, integrated family planning messages with breast cancer awareness and prevention messages and reached more than 4,000 women.

The USAID-funded, Abt-led Jordan Communication Advocacy and Policy (JCAP) project is a five-year effort working with Jordan’s Higher Population Council, the Ministry of Health, and civil society organizations to improve the knowledge and practice of family planning and enhance the policy environment supporting access to quality family planning services. 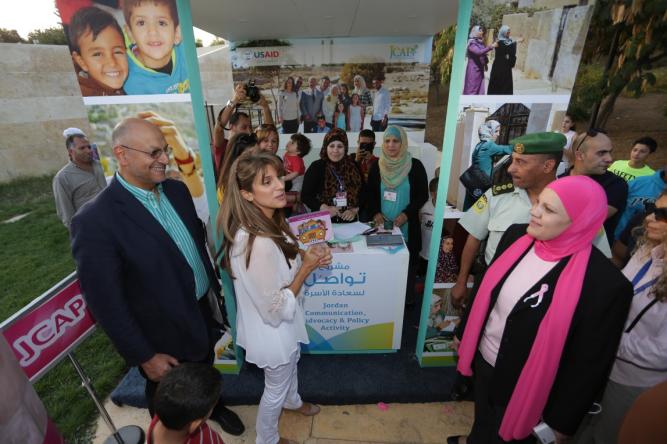 Her Royal Highness Princess Dina (center) with Nisreen Qatamish, Director of the Jordan Breast Cancer Program (right) and JCAP Chief of Party Ayman Abdelmohsen (left) at the JCAP booth during the Family Day.
Photo credit: JCAP During these events, JCAP and KHCF addressed misconceptions that some contraceptive methods – especially oral contraceptive pills – may significantly increase the risk of cancer in women. Nearly 90 percent of women in Jordan have questions about the link between oral contraceptive pills and breast cancer, according to the 2014 JBCP lectures report.

“JBCP and JCAP are both driven by their belief that societies can benefit from healthy women who can fully participate in family, workforce, and community life,” Qatamish said.

The event in Amman was held under the patronage of Her Royal Highness Princess Dina Mired, Director General of the KHCF. Princess Dina visited JCAP’s booth and called attention to USAID-Jordan’s support for improving women’s health in Jordan.

“We are very grateful to the great support USAID Jordan provides us to improve the health and wellbeing of our women in Jordan,” Princess Dina said.

Focus Areas
Private Sector Health
Chronic/Non-Communicable Diseases
Health
Regions
Middle East & North Africa
Jump Forward
Work With Us
Ready to change people's lives? We want to hear from you.
We do more than solve the challenges our clients have today. We collaborate to solve the challenges of tomorrow.
Link