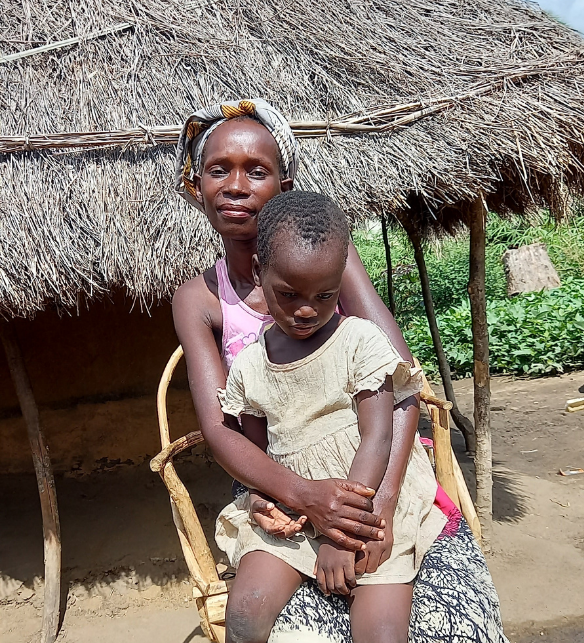 While climate change is wreaking havoc around the world, Sofala province in Mozambique provides a grim preview of what’s to come if global goals to reduce emissions aren’t met. Sofala has been the scene of several catastrophic weather events in recent years, with residents calling the province a “road of wind” due to the barrage of cyclones that have caused countless families to lose their homes and possessions. Without strong support systems, they have no option but to live out in the open, unsheltered. As a response, the Mozambican government created safe resettlement centers for the displaced. However, health care for these victims is often seen as a secondary concern. Between evacuations and the destruction of their homes, many HIV-positive people lose their medicines and health cards, preventing them from continuing treatment and causing their immune systems to weaken as stress compounds.

Marina Joaquim, 28, currently resides in the town of Tica in Nhamatanda district. She is the head of her family and mother to 5-year-old Beatriz. Marina discovered her HIV status during her pregnancy but, thanks to her consistent treatment, Beatriz was born negative.

But women are disproportionately vulnerable to the effect of climate change, and Marina was no exception. In 2019, Marina and Beatriz were devastated by Cyclone Idai and other storms that swept through Mozambique, and Marina lost everything—including her health documents and antiretroviral (ARV) medication to treat her HIV. When she lost her medicines again during Cyclone Eloise, Marina went three weeks without ARVs. She also didn’t have access to a hospital at her new resettlement center. Without treatment, her health rapidly deteriorated.

One day, Marina met an HIV health counselor from the Abt-led USAID Efficiencies for Clinical HIV Outcomes (ECHO) project. The next day, the counselor brought her a new health card and a full bottle of ARVs. More than two years later, a counselor continues to visit Marina at home and provide preventive care to Beatriz. Together, Abt, ECHO, and Mozambique are demonstrating another kind of climate resilience.

Abt-trained community workers ensure that those dealing with the fallout from natural disasters continue HIV treatment. At the resettlement center in Mafambisse district, they lead talks on HIV testing and ARVs, helping resettled people open up to receiving HIV care. Despite the loss and devastation that climate change has brought to Mozambique, ECHO counselors are ensuring that resettled families are getting the treatment they need to stay healthy.

Technical Assistance & Implementation - January 2023 From equitable TA&I approaches to success stories and staff spotlights, check out the latest news from Abt.
Spotlight On: Health and Climate Abt combines expertise in global health and climate change to devise strategies that will improve the resilience of systems and people worldwide.
A Win/Win: Driving Improved Climate and Health Outcomes Through Mainstreaming of Co-benefits Quantif... Stakeholders can use information generated from cost-benefit, co-benefit, and general economic analyses to make informed, evidence-based decisions for health.
Why We Should Invest in Productive Use of Energy for Health Abt staff have a new blog post on Climatelinks.org exploring the benefits of financing productive uses of energy in the health sector, including through program...
Focus Areas
Climate, Environment & Energy
Climate Change
Land, Waste, and Emergency Management
Mitigating Risk and Building Resilience
Health
Infectious Diseases & Global Health Security
Capabilities
Technical Assistance & Implementation
Implementation
Regions
Sub-Saharan Africa
Jump Forward
Work With Us
Ready to change people's lives? We want to hear from you.
We do more than solve the challenges our clients have today. We collaborate to solve the challenges of tomorrow.
Link