The separation of children from their families is an important issue for families who use emergency shelters. 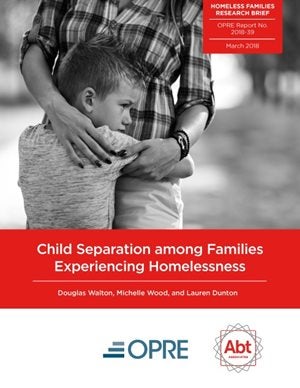 A new research brief from Abt Associates and the Office of Planning, Research and Evaluation (OPRE) provides a clearer picture of the extent of child separation among families experiencing homelessness. The brief examines data collected from, among other sources, the Family Options Study, which was supported by the U.S. Department of Housing and Urban Development. Our researchers studied data on nearly 5,400 children who were either with their families in emergency shelter or separated from their families at shelter entry.

Among the findings, about 24 percent of families in emergency shelter reported that at least one child who was not with them in the shelter, either voluntarily or involuntarily. Nearly 40 percent of families were separated from a child at some point in their lives. Most separated children were living with other parents or relatives before their families entered a shelter, and a majority of these children had been apart from their sheltered families for 18 months or longer. Separated children tended to be older; the typical separated child was a 10-year-old boy.

“This brief reveals more extensive and persistent levels of child separation than prior research,” said Abt Senior Analyst Douglas Walton.

“In most cases, entering shelter itself did not appear to be the shock that drove child separations, as most separated children had been apart from the family for over a year before entering shelter,” continued Walton. “However, we do find that housing instability, both before and after the shelter stay, is associated with higher rates of child separations.”

Results suggest that family support services may require further improvement or targeting to address the complex challenges these families face.