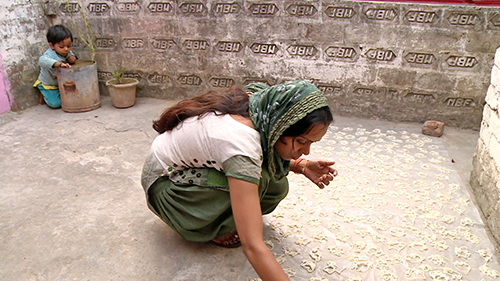 Rita Garg received valuable advice from a careline established to advise users of DMPA – a tri-monthly injectable contraceptive – about possible side effects, how to manage them, when to return to the provider, and more information.
Photo credit: SHOPS project In Uttar Pradesh, a state in northern India, 70 percent of women discontinue injectable contraceptives before the second dose. One factor in this is the lack of timely and consistent counseling. Formative research – conducted under the predecessor project of the Strengthening Health Outcomes through the Private Sector (SHOPS) Project – showed that counseling potential adopters on side effects at the time of administration, while important, is insufficient. Women need additional reassurance and guidance when experiencing side effects. However, these women often may not return to their provider to discuss their experience or seek alternatives due to access barriers—both physical and financial.

“The SHOPS project focused on addressing these barriers through the Dimpa Careline,” said Ramakrishnan Ganesan, director of SHOPS India. “The Careline provides users of depot medroxyprogesterone acetate (DMPA) —a trimonthly injectable – with information on possible side effects, how to manage them, when to return to the provider, and reminders on subsequent injection dates.”

Rita Garg and her husband, who live in on the edge of a small town in Uttar Pradesh, wanted to wait two years before having a second child. Garg, after consulting her doctor about contraceptive options, chose DMPA. She received her first injection six weeks after delivering her daughter, but began experiencing side effects before her next injection. Garg needs multiple means of transport to travel the 10 kilometers to reach the clinic where her doctor works. Upon arrival, she encountered long wait times. Garg instead consulted her neighbors, who shared stories of contraceptive side effects, weight gain, and loss of eyesight. She was worried and questioned whether to continue with DMPA.

A year later, Garg has completed four cycles of DMPA injections, and is happy to have continued with the choice she made.