Abt Associates has cultivated and developed women’s leadership in Senegal through women’s engagement in community based health insurance (CBHI) since the PHRplus project (2000-2005) through to the present Health Systems Strengthening Project (2012-2016) both funded by USAID.

Women today in Senegal are a leading presence in the management of local community based health insurance organizations – called mutuelles – and regional federations. One early approach was to ask women’s groups, who were active in income generating activities, to adopt the mutuelle scheme to protect their revenues against unexpected and catastrophic health-related expenditures. Through their engagement, many women developed management, entrepreneurial, and social mobilization skills, and have become the core of today’s mutuelle organizations. 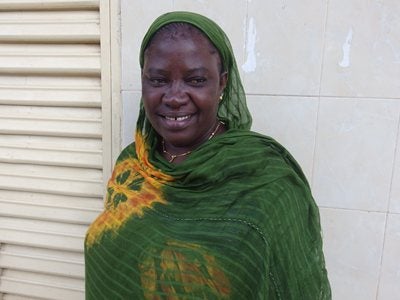 Lobbe Cissokho, a leader in regional and national mutuelle federations in Senegal and a social entrepreneur supporting women’s empowerment.
Photo credit: Melinda Ojermark, Abt Associates One such example is Lobbe Cissokho. Very early, she understood the social potential of microfinance for strengthening the capacities of women in her region. She started with heading a micro finance institution in her native city of Kaolack in eastern Senegal.

With the support of PHRplus, she added the community-based health insurance services to the institution’s portfolio with the vision of developing a regional network of community-based health insurance schemes. She now is leading the Regional Federation of Mutuelles in the Kaolack region. This pioneering work provided the platform for demonstrating the model for extending coverage of the poor through mutuelles, under the government’s universal health coverage policy.

“We are on the road to professionalization of the mutuelles and have taken a giant step forward because now we have manuals of procedures for managing them,” Cissokho said. “Equipped with IT tools and with Abt’s assistance we have also worked on including geographic information and these systems are enabling us to take a huge leap in professionalization.”

Based on her experience and leadership, she has been elected as a member and Treasurer of the Executive Committee of the National Federation of Mutuelles of Senegal, a national umbrella organization.

Focus Areas
Health Policy & Systems
Private Sector Health
Health
Capabilities
Technical Assistance & Implementation
Regions
Sub-Saharan Africa
Jump Forward
Work With Us
Ready to change people's lives? We want to hear from you.
We do more than solve the challenges our clients have today. We collaborate to solve the challenges of tomorrow.
Link