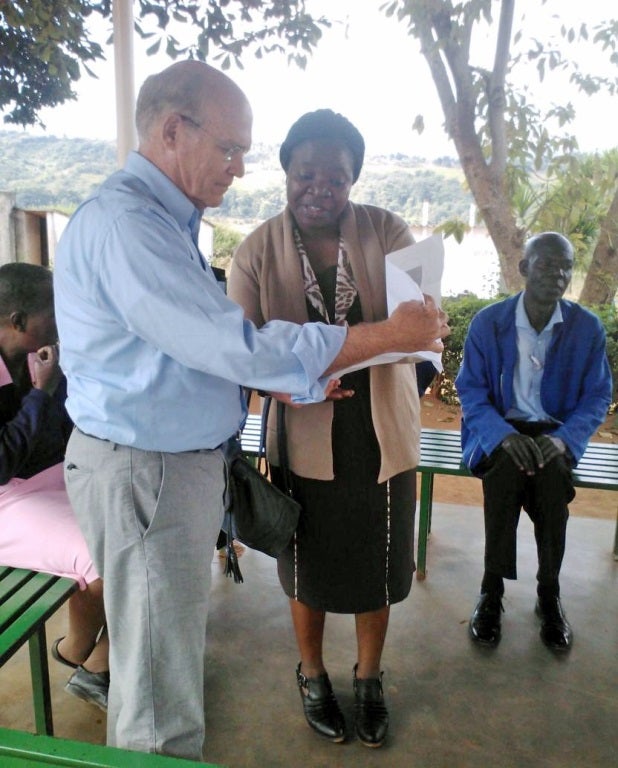 Rear Admiral Tim Ziemer (left), U.S. Global Malaria Coordinator, discusses malaria cases at the Zindi clinic with the Provincial Medical Director for Manicaland, Zimbabwe.
Photo credit: PMI AIRS . As resistance among malaria-carrying mosquitoes to the commonly used pyrethroid insecticide has increased, the PMI AIRS Project has switched to using organophophates (OPs), which have shown to be more effective in killing mosquitoes that carry the malaria parasite when used in indoor residual spraying (IRS).

PMI AIRS project staff gave a presentation on the effectiveness of OPs at the American Public Health Association’s 143rd Annual Meeting in Chicago, November 3, 2015. Findings in the presentation – based on a study in Zimbabwe – show a reduction in reported malaria cases in areas sprayed with a newer class of insecticide.

The study found that when OPs were used in indoor residual spraying (IRS), the number of confirmed malaria cases at health facilities declined more quickly than in areas where no IRS was conducted or where IRS used the pyrethroid insecticide.

OPs cost ten times as much as pyrethroid insecticide. However, OPs are not only more effective but also last longer, allowing the project to reduce the number of times it sprays in one year.

View the presentation:
Preliminary Results: The Effect on Malaria Burden after a Change in Insecticide for Indoor Residual Spraying in Zimbabwe
Focus Areas
Health
Regions
Sub-Saharan Africa
Jump Forward
Work With Us
Ready to change people's lives? We want to hear from you.
We do more than solve the challenges our clients have today. We collaborate to solve the challenges of tomorrow.
Link