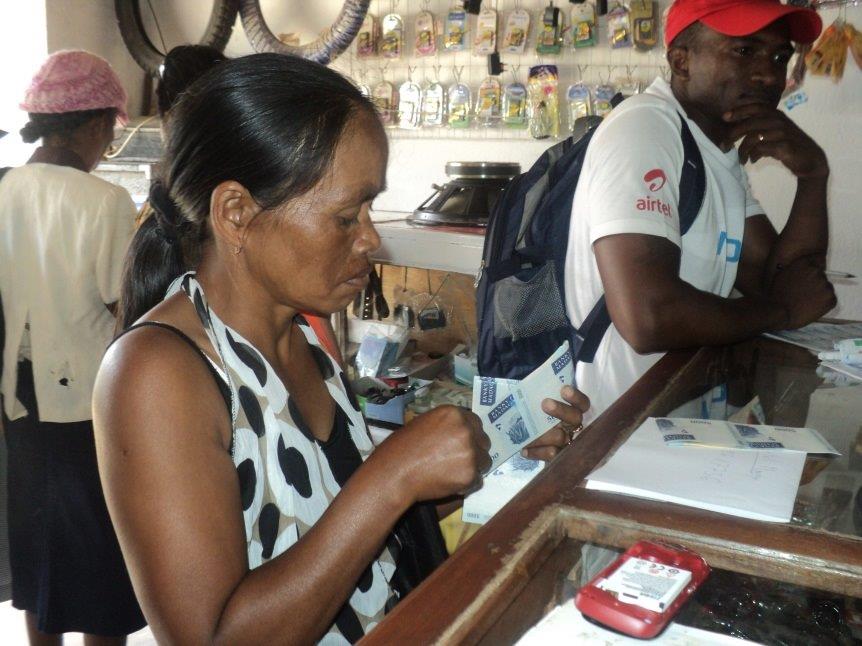 AIRS introduced mobile banking in Madagascar to process payments to seasonal workers. More than $350,000 was transferred during the 2013-2014 spray campaign. Information, Education, and Community Mobilizer Paulinette Ranivoarisoa was the first to receive payment through the new system.

Thanks to recent mobile developments, indoor residual spraying, which is used to prevent malaria, is more efficient and environmentally safer. The Abt Associates Africa Indoor Residual Spraying project (AIRS) protects against malaria by spraying insecticide on the walls, ceilings, and other indoor resting places of mosquitoes that transmit malaria. AIRS is funded by the President’s Malaria Initiative through USAID. In Madagascar, AIRS is using mobile banking to make payments safer for seasonal workers. The project also is using mobile soak pits to allow AIRS spray teams to access the most remote areas in the most efficient way.

The AIRS Madagascar program is operating more efficiently by allowing its seasonal workers to receive secure payments via mobile phones. In the 2013-2014 spray campaign, more than 2,100 seasonal workers were able to receive their payments via the new mobile banking system. These workers are given a unique pin and protected SIM card and are trained to receive their payments via a cash point or their phone. The system allows workers to choose the best time and place in which they wish to receive the money, reducing the risk of fraud and theft. Project costs in labor and travel were also reduced with the new system – only 1.37 percent of the total funds transferred went to cover fees. “The new mobile banking system allows workers to receive their payments risk-free and without fees. It also gives them the ability to transfer funds to others in different parts of the country,” said Xavier Pitroipa, AIRS Chief of Party. “The system saves the AIRS project money because it eliminates the need for the seasonal finance assistant positions, which were originally designed to deliver cash payments to the seasonal workers.” 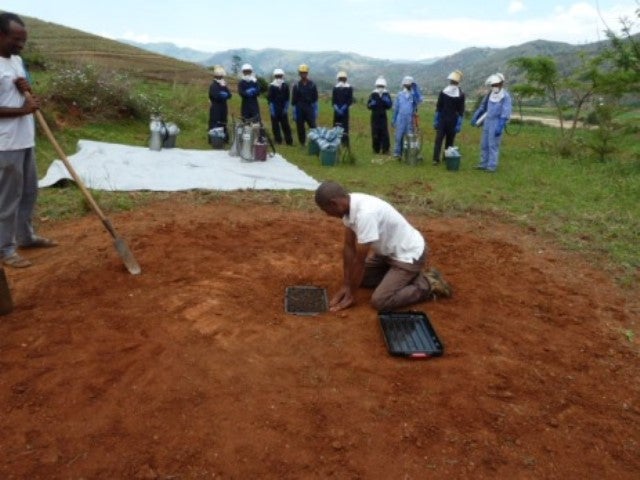 An AIRS environmental compliance officer shows spray operators how to build a mobile soak pit before beginning to spray. Activated carbon allows a mobile soak pit to effectively adsorb insecticide, resulting in almost no disposal of toxins into the ground.

After a long day of protecting people against malaria, AIRS spray teams are trained to dispose of liquid waste by rinsing their gear in a permanent, in-ground filter called a soak pit. These centrally located pits adsorb, filter, and safely degrade the traces of insecticide found in the spray wastewater. Often, however, teams are obliged to camp in hard-to-reach villages and do not have easy or nearby access to a soak pit. AIRS developed a new solution: a mobile soak pit – a 20-quart container with layers of stone, activated granulated charcoal, and sawdust. As they move throughout the country, spray teams now install a mobile soak pit in compliance with environmental guidelines. In the 2013-2014 AIRS campaign, teams working in remote areas of Madagascar increased efficiency and improved environmental safety by using mobile soak pits, which can be installed at any wash site within 15 minutes and, after use, be removed and used in another location. “The mobile soak pits leave close to zero environmental footprint and are in fact more environmentally safe – the potentially hazardous waste remains in the mobile pit rather than in the ground,” said Peter Chandonait, Environmental Compliance and Safety Manager of the AIRS project and Senior Associate at Abt. For 2014-2015 spray campaigns, AIRS will continue use of the mobile soak pits Madagascar, Mali, Senegal, and Ethiopia.