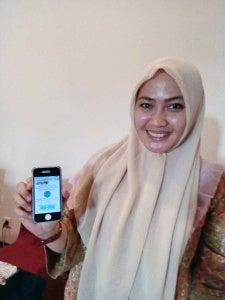 A pilot participant showing her successful completion of the game.
Photo credit: Yasmin Kapitan KOMPAK is Australia’s primary vehicle to help the government of Indonesia implement the Village Law, a number of measures adopted in 2014 to increase government decentralization. KOMPAK is managed by Abt JTA.

Bina Pemerintahan Desa, the Directorate General for Village Government in the Ministry of Home Affairs (MOHA), has the mandate to strengthen the capacity of village governments to effectively administer the Village Law. Since July 2015, Bina and KOMPAK-funded staff have been training tens of thousands of representatives from the Village Apparatus and sub-district governments across Indonesia.

As a follow up, KOMPAK worked with Pulse Lab Jakarta to create a mobile simulation game for village and district governments to play at the conclusion of each training session. Participants can play the game on any smartphone in about an hour. Village heads take on the role of village chief, or Kepala Desa, and make a number of real-life decisions similar to the execution of their duties and responsibilities under the Village Law.

The game includes scenarios on prioritization of key issues, preparation of the village strategic planning and annual budgets, selection of who should be included in making decisions and decision-making on how to identify fit-for-purpose options/solutions as responses to simulated circumstances.

KOMPAK is Australia’s primary vehicle to help the government of Indonesia implement the Village Law, a number of measures adopted in 2014 to increase government decentralization.