Abt has established clear evidence on homelessness in America for more than a decade through the Annual Homelessness Assessment reports.

Homelessness has decreased across America, according to a new report from Abt Associates and the U.S. Department of Housing and Urban Development (HUD). The findings reflect the latest 2016 data from a two-part report, the Annual Homeless Assessment Report (AHAR).

The point-in-time data show that 549,928 people were experiencing homelessness on a single night in January 2016. This is 15 percent fewer people since 2007, the year Abt began collecting, analyzing, and reporting these data.
"For more than a decade, Abt Associates has been establishing clear, rigorous evidence on the state of homelessness in America,” said Meghan Henry, project director for AHAR Part 1 and an associate at Abt. “These data show that communities are both improving their point-in-time count methodologies and are making real progress in reducing and ending homelessness.” 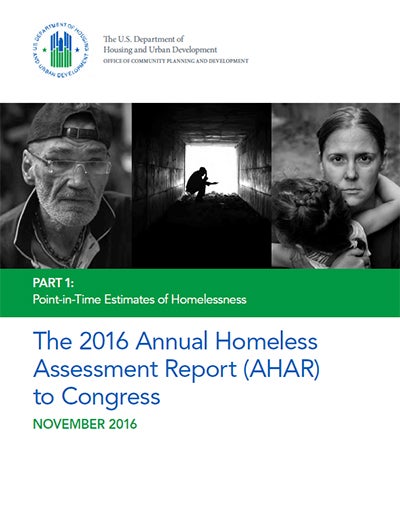 Among veterans, homelessness declined by 46 percent between 2009 – the first year of data collection – and 2016. And since 2007, the number of chronically homeless individuals declined by 35 percent.

Thirty-seven states experienced declines in homelessness in the past year, whereas 13 states plus the District of Columbia saw increases between 2015 and 2016.

New in AHAR part one is a detailed section on state-level data with estimates of homelessness for individuals, people in families with children, unaccompanied youth, veterans and chronically homeless individuals.

Learn more about Abt’s work in reducing and ending homelessness.

Veteran Homelessness Cut in Half