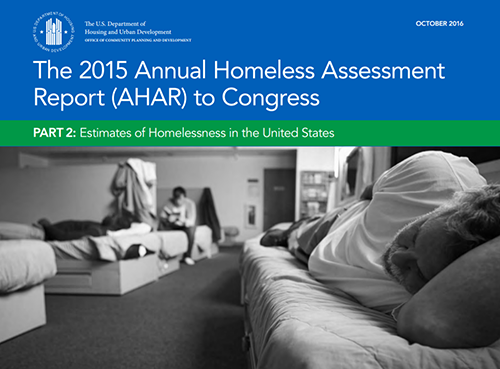 Abt Associates, in partnership with the U.S. Department of Housing and Urban Development (HUD), analyzed data from the Homeless Management Information System (HMIS) for the report. HMIS is a local information technology system that organizations use to record housing and services data for individuals in shelter.

This two-part report, produced annually by Abt and the University of Pennsylvania on behalf of HUD, provides a one-year national estimate of people in emergency shelter and transitional housing programs and people in Permanent Supportive Housing, as well as an in-depth look at their demographic characteristics, geographic distributions and service-use patterns.

In 2015, an estimated 1.48 million people experienced sheltered homelessness over the course of a year. For the first time, AHAR Part 2 includes one-year data on people ages 18-24 and 25-30 who experienced sheltered homelessness, which refers to homeless individuals who receive temporary shelter in an emergency shelter, transitional housing, or safe havens.

“AHAR is an important resource for communities and stakeholders working to prevent and end homelessness,” said Claudia Solari, Ph.D., associate at Abt and AHAR project director. “The report offers information on specific populations, such as veterans and families with children, and follows trends over time. With new data supporting policies and programs, we have data-driven insights on what is working.”

Among the study findings are: Part 1 of the 2015 AHAR report, published in November 2015, provides estimates of homelessness based on the Point-in-Time (PIT) count data. Communities gather the PIT count data across the United States over one night in late January. The 2016 update of AHAR Part 1 will be released in late fall.

Part 2 of the report offers a richer portrait of homelessness in America by adding one-year estimates of sheltered homelessness from HMIS.

Read the full AHAR Part 2 report.
Read the 2015 AHAR Part 1 report.
Focus Areas
Homelessness
Housing, Communities & Asset Building
Regions
North America
Jump Forward
Work With Us
Ready to change people's lives? We want to hear from you.
We do more than solve the challenges our clients have today. We collaborate to solve the challenges of tomorrow.
Link