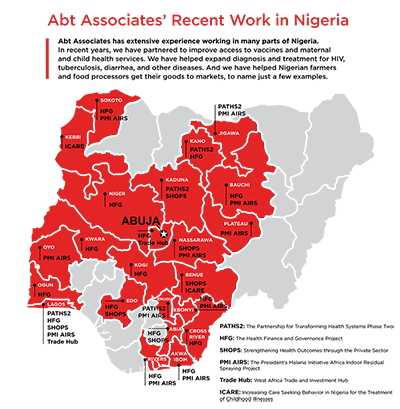 In the last decade, Abt Associates has worked across Nigeria under ever-changing circumstances and sometimes difficult environments.

Abt has partnered to improve access to vaccines and maternal and child health services. We helped expand diagnosis and treatment for HIV, tuberculosis (TB), diarrhea, and other diseases. And we helped Nigerian farmers and food processors get their goods to markets, to name a few examples.

"Abt has been working across multiple sectors in Nigeria for years,” said Diana Silimperi, division vice president for International Health at Abt. “We are proud of the significant progress we have made in establishing sustainable health solutions for the population by engaging with federal, state and local governments as well as with communities throughout the country.”

Below is a sample of some of Abt’s work across Nigeria.

The Partnership for Transforming Health 2 (PATHS2)

PATHS2 facilitated the efficient and effective use of Nigeria’s resources to attain health-related Millennium Development Goals by improving the planning, financing, and delivery of sustainable and replicable pro-poor health services in five states beginning in 2008: Enugu, Jigawa, Kaduna, Kano, and Lagos. The program was extended in two states – Lagos and Enugu – through July 2016, principally working through public-private partnerships (PPPs) to strengthen service delivery. 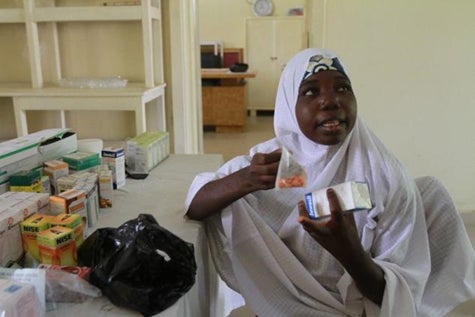 Adama Usman, 23, a farmer with four children, shows off the more affordable medicine she bought during a visit to the Hadejia General Hospital in Jigawa state, Nigeria. The hospital was able to create a more sustainable supply of medicine with the help of the PATHS2.
Photo credit: PATHS2 PATHS2 has:

HFG has been working since 2013 to support the mobilization of resources from the public sector, private-for-profit sector, and NGOs to increase planning, allocation, tracking, and utilization of domestic funds to support Nigeria’s HIV and AIDS response.

HFG has partnered with the National Tuberculosis and Leprosy Control Board to scale up the use of smartphones in supportive supervision for tuberculosis (TB) patients.

And in 2015, HFG began working to assess the functionality of public health facilities to carry out key MNCH, family planning, and reproductive health interventions, across five states. PMI AIRS introduced and piloted indoor residual spraying in two local government areas of Nassarawa State and assisted the Nigerian National Malaria Control Programme in establishing six mosquito entomological monitoring sites located across five geopolitical zones of the country. Entomological surveillance and investigations provide essential information on vector species, including their distribution, density, the ecology and behavior of mosquitoes, and their susceptibility and resistance to insecticides used for malaria control.

In 2016 the PMI AIRS Nigeria program is conducting entomological surveillance in six sentinel sites: Bauchi, Oyo, Ebonyi, Akwa Ibom, Nasarawa and Sokoto states, which were strategically selected to represent all ecological zones of the country.

The Strengthening Health Outcomes through the Private Sector (SHOPS) Project 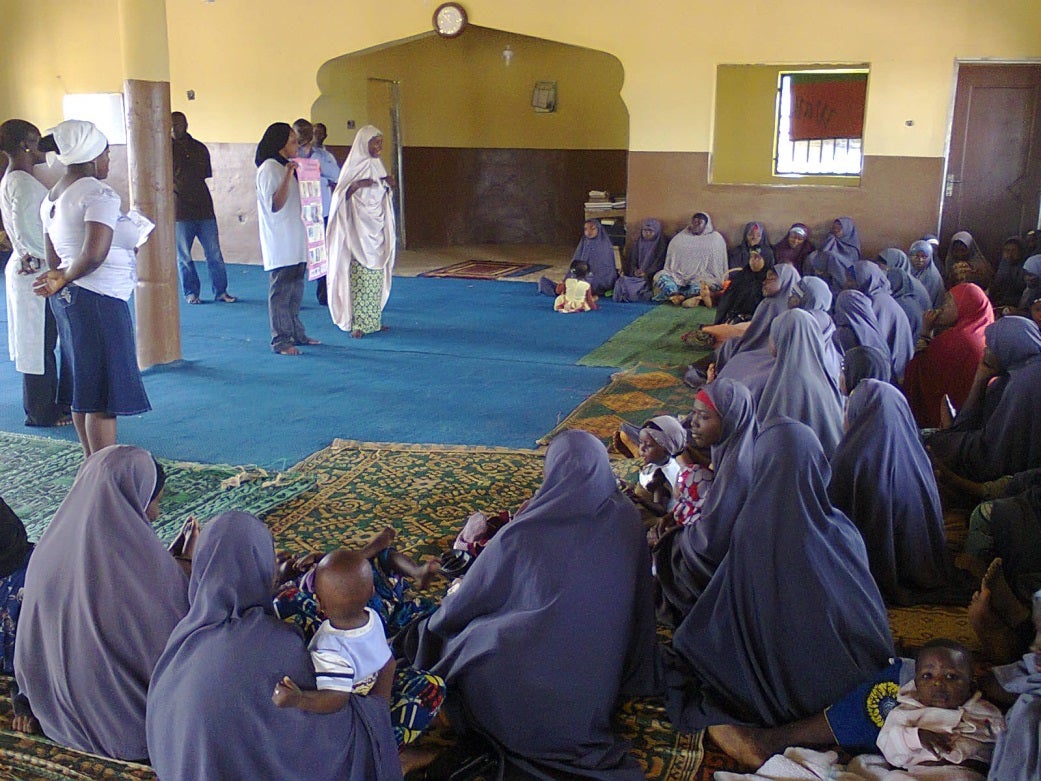 A private health facility nurse talks to women in a mosque about child spacing during a community mobilization meeting.
SHOPS Nigeria trained family planning community health promoters (CHPs) – volunteers who are respected in their communities – who used family planning counseling brochures and job aids to educate people in their communities and make referrals to trained private providers. CHPs also work directly with trained facilities to organize promotion events like community health days, which offer services to the community to attract new clients.
Photo credit: SHOPS The project assisted private providers in independent clinics to improve, expand, and sustain their practices by increasing access to loans and business training. The project structured a Development Credit Authority (DCA) loan guarantee focused on health providers. By the end of 2015, three banks had provided nearly 2,000 loans worth $13.9 million.

SHOPS also educated private providers – such as doctors and nurses, community pharmacists, and private drug shops, known as proprietary patent medicine vendors (PPMVs) – on the proper guidelines for treating uncomplicated childhood diarrhea through a combination of oral rehydration solution (ORS) and zinc, as recommended by the World Health Organization.

The SHOPS diarrhea management program operated in two target states: Nasarawa and Abia. In January 2016 the program in Benue state transitioned to The Bill & Melinda Gates Foundation funding under the iCARE Project, which Abt also is involved in. To date, more than 4,500 PPMVs have been trained on diarrhea management. SHOPS also worked with local zinc manufacturers and importers to ensure that both ORS and zinc products were available to caregivers. Major activities also included mass media campaigns with radio ads in local languages, outreach to more than 10,000 community-based organizations, and training of 300 zinc champions.

Through its Financial Advisors Network, the Abt-managed USAID West Africa Trade and Investment Hub is developing in-country and regional capacity to generate sound, bankable proposals for business investment and loan approvals. In Nigeria, the Trade Hub works with 10 financial advisors—six in Lagos and four in Abuja—who have established $17 million in proposals with several large companies seeking expansions.

In late 2015, the Hub collaborated with the Nigerian Institute of Animal Science to organize a B2B event in Lagos to promote investment in the country’s animal feed sector. “From Mash to Pellet: Adding Value in the Animal Feed Sector,” drew more than 100 stakeholders to discuss innovations in equipment, ingredients, and techniques that would catalyze investment in product and process upgrading. Improvements in the animal feed sector benefit those working in livestock as well as maize, millet, sorghum and rice, as all are processed as animal feed.

Abt Associates was subcontracted by Pact International in 2014 to provide technical assistance to the ICARE Project. Abt is responsible for ensuring the availability and supply of diarrhea treatments in the private sector and for training PPMVs and community pharmacists in diarrhea management.