Abt Associates’ very own Kerri-Ann Guyah took the stage recently at the Smithsonian National Museum of Natural History to talk about her fight against Zika. But she actually discussed two fights. The other one: her battle to get people to combat Zika.

As Abt’s vector control and environmental compliance manager for the USAID-funded Zika AIRS Project (ZAP) in Jamaica, Guyah spoke at the Smithsonian event, “Stories from the Frontline: Fighting Zika.” She discussed Jamaica’s inertia about fighting mosquitoes that carry the disease, which residents consider just a nuisance and part of island life. They also were reluctant to accept ZAP’s new product, Bti, a larvicide that eliminates mosquito breeding grounds by killing mosquito larvae in standing water. Such breeding grounds are pervasive because many households store water in receptacles or containers for domestic use.

Another tactic: regular household visits during which the ZAP team explained the importance of reducing cases of malaria and steps to do that. Project teams worked on holidays and weekends to increase the likelihood people would be home during their visits for persuasion and spraying. 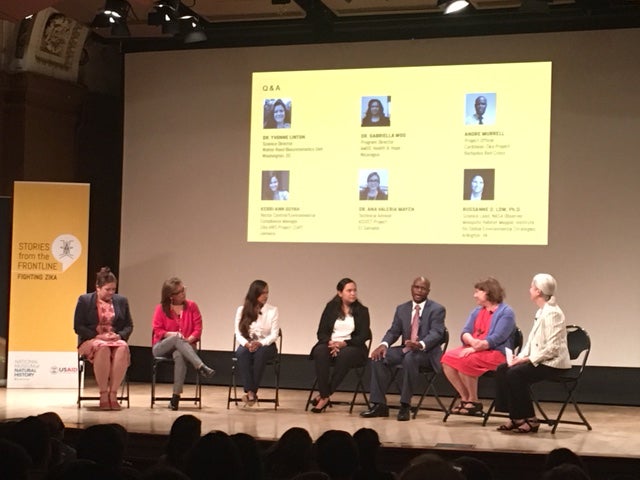 Fortunately ZAP, an emergency-response project that is building the capacity of Latin America and Caribbean governments to respond to and prevent the spread of the virus, has government support. ZAP Jamaica, for example, works in partnership with the Ministry of Health and the University of the West Indies to monitor and reduce the population of infected Aedes aegypti mosquitoes, which spread the virus by biting. This mosquito species also can carry diseases such as Chikungunya, dengue and yellow fever.

None of this ultimately matters, though, if the local population doesn’t accept the need to combat the problem. Guyah and the rest of the ZAP team saw that cultural barrier and overcame it.

Read more about our work in fighting mosquito-borne diseases:

Focus Areas
Infectious Diseases & Global Health Security
Health
Capabilities
Technical Assistance & Implementation
Technical Assistance
Implementation
Communications & Behavior Change
Regions
Latin America & the Caribbean
Jump Forward
Work With Us
Ready to change people's lives? We want to hear from you.
We do more than solve the challenges our clients have today. We collaborate to solve the challenges of tomorrow.
Link