In 2012 the PMI AIRS Project began recycling plastic insecticide bottles in Ghana, turning them into paving blocks. Recently, PMI AIRS was invited by USAID to give a presentation on its recycling program, recognizing the program’s potential value across USAID’s Health Bureau, as well as its possible application in agricultural projects.

In 2016, the Abt Associates-led President’s Malaria Initiative Africa Indoor Spraying Project (PMI AIRS) surpassed 1 million plastic insecticide bottles recycled since the effort began in Ghana in 2012. This PMI AIRS’ innovation has recycled the bottles into useful products such as pavement blocks and dust bins.

PMI AIRS’ recycling program caught the eye of Rachel Dagovitz, USAID’s Global Health Bureau Environmental Officer, who is in charge of minimizing the negative environmental impacts of USAID global health programs while maximizing the positive social impacts. The officer first met with Peter Chandonait, a principal associate for International Health at Abt Associates and director of environmental compliance and safety for PMI AIRS. Then Chandonait received the honor of an invitation to discuss PMI AIRS recycling initiatives at USAID. 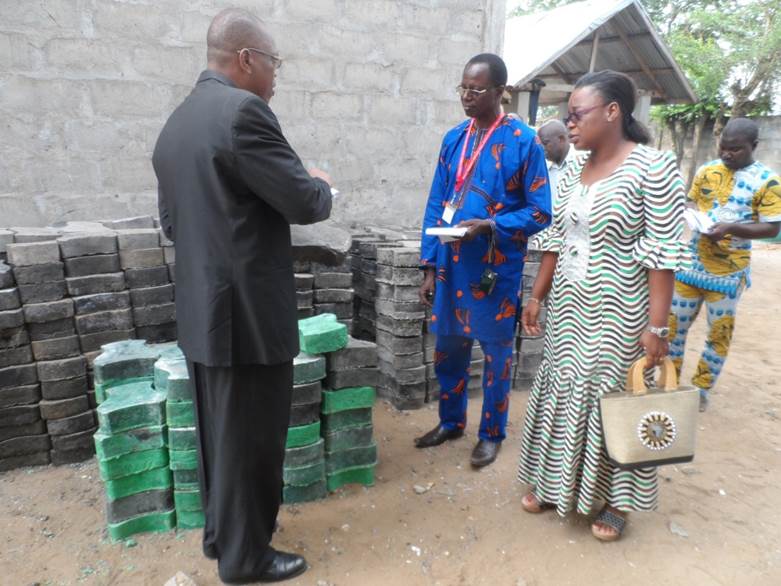 Paving stones made from recycled insecticide bottles in Benin. The PMI AIRS Project has recycled more than 1 million plastic bottles in nine project countries. “We calculated that [PMI AIRS] recycling has avoided the emission of over 300 metric tons of heat-trapping carbon dioxide, as well as other noxious and possibly toxic emissions,” Chandonait said. “This was only possible due to the perseverance and creativity of the PMI AIRS in-country teams.”

Recycling has not always been a straightforward and easy process for PMI AIRS, Chandonait said. Some governments need to be convinced that this recycling is a clean and safe process, by testing for pesticide residues during the various processing steps. The cost of transporting the bottles can be an issue, and some recyclers charge fees for their services. However, in many places, raw plastic is a valuable commodity, and treated accordingly.