For the Morogoro District Council, annual audits by Tanzania's controller and auditor general had become something to dread. For seven straight years, the jurisdiction received reports that reflected poorly on its financial management and blocked it from receiving local government grant money.

Abt-led projects are improving community financial management, strengthening private-sector partnerships to expand the quality of and access to health care, and increasing the availability of fortified food products in order to reduce childhood stunting — and death — due to malnutrition.

However, with assistance from Wajibika, an Abt Associates-led project, the district turned its audit performances around in a single year. The clean audit report entitled the council to 100 percent of its local government capital development grant plus a 20 percent bonus. In the previous year, the council received just 30 percent of its grant.   “Wajibika contributed enormously to our success through training and by guiding us on the steps needed to improve our performance,” said Michael Ntakandi, internal auditor in Morogoro. “Now we use Epicor accounting software, which saves us a lot of time, and our internal auditors use a risk-based audit plan.”   USAID-funded Wajibika — one of several Tanzania programs implemented by Abt — has supported the government’s decentralization policies by strengthening local districts’ financial management and transparency through training, mentoring, and supervision.   Other Abt-led projects are addressing childhood malnutrition, the systematic use of data to track the capacity of the health care system, and greater involvement of the private sector in expanding health services. Abt is also involved in evaluating how well the government is meeting its health care goals.

Children’s lives are also the focus of an Abt food-security project: USAID-funded Tuboreshe Chakula – Swahili for “Let’s Improve Food.” 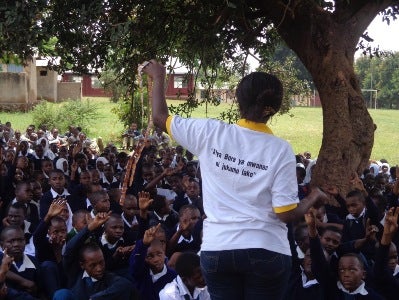 Sarah Luzangi of the Abt Associates-managed USAID Tuboreshe Chakula project shows off packets of micronutrient powder during a campaign stop at Kwaraa Secondary School in Babati, northern Tanzania in early 2014. During the course of the month-long campaign, project staff visited towns and villages in Tanzania’s Feed the Future target regions to promote awareness and use of the powder, specially formulated for young children to help reduce malnutrition.
Photo credit: Brie Blacklidge, Abt Associates Nearly 40 percent of Tanzanian children suffer from stunted growth or anemia — or both — because of malnutrition. Each year in Tanzania, vitamin and mineral deficiencies contribute to the deaths of more than 27,000 children and 1,600 women.   Malnutrition and other food security issues stem, in part, from localized food shortages caused by low farm yields and post-harvest losses. Poor Tanzanians sometimes cannot afford to buy nutritious foods or do not understand the importance of good nutrition.   Abt, through Tuboreshe Chakula, is working to dramatically increase the supply — and demand — for nutritious and fortified foods. It is introducing dosifier machines that add micronutrient powder to flour and working with processors to add Vitamin A to sunflower oil. A year ago, it introduced to Tanzania a commercially distributed, low-cost micronutrient powder that can be sprinkled on food given to children aged 6 months to 5 years—when malnutrition is most likely to affect children’s development.   The impact is showing: In early 2013, the project’s semi-annual survey found that nearly a third of households interviewed with children aged 6 months to 5 years were using the micronutrient powder—up from 19 percent in only six months. The survey also found that 42 percent of shops sell fortified oil, and 31 percent of household are now consuming fortified oil.   Because millers must upgrade their facilities and businesses to fortify food, Abt is also helping processors of maize, rice, and other foods to modernize and build capacity in order to improve the quality, safety, and sales of their products.  The upgrading leads to higher sales: In early 2014, nine previously small-scale millers were reclassified as medium-scale, meaning their annual revenues exceed $100,000.

Tanzania is a leader in Africa when it comes to timely, accurate information about spending on public health. During the 18 months that ended in March 2014, the Abt-led Strengthening Capacity in Health Financing Tanzania (SCHFT) project pushed this resource tracking even further. 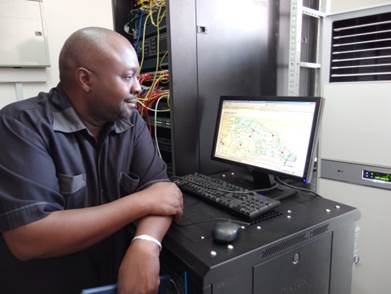 Emmanuel Mahinga, information communications technology director for the Prime Minister’s Office-Regional Administration and Local Government, examines a country map showing where Abt-trained district councils use Epicor financial management software.
Photo credit: Melinda Ojermark, Abt Associates Reliable data is a powerful tool for analyzing the effectiveness of the public health system. The Abt project recommended new activities to consider when producing health budget and expenditure data, trained health economics professors, and merged — with assistance from the World Health Organization — three data-collection tools into one.   SCHFT collaborated with the Ministry of Health and Social Welfare to build the capacity of the Health Economics Department within the University of Dar es Salaam so it could become an additional resource for health accounts methodology, according to Charles Pallangyo, permanent secretary of the ministry.   “The new expertise housed within the university will enable Tanzania to train a new generation of resource-tracking practitioners,” Pallangyo said.   By building the country’s capacity, SCHFT ensured greater equity in, access to, and availability of health services across the country. It also linked program and resource allocation decisions to evidence-based processes.

Despite a recent history of strong economic growth, Tanzania faces a number of major challenges, including a weak health care infrastructure and a shortage of health workers at all levels.   The Abt-led, USAID-funded Strengthening Health Outcomes through the Private Sector (SHOPS) project is working with the government of Tanzania, NGOs, and private sector umbrella organizations to strengthen the health system in a number of areas. For example, SHOPS collaborated with Tanzania’s Public-Private Partnership Technical Working Group and the International Finance Corporation’s Health in Africa initiative to assess the private health sector with an eye on strengthening health service, delivery, financing, and human resources.     SHOPS also:

Abt also led a team that conducted a mid-term evaluation of Tanzania’s 2009-2020 health sector strategic plan. Abt’s Health Finance and Governance (HFG) project guided the review process, and an Abt staff member served on the 12-member team of international consultants who carried out the evaluation. The team looked at how well the health care system was meeting Ministry of Health goals.   Rather than providing care focused on a single illness, the system was credited with managing treatment in an integrated manner—by acknowledging, for example, that patients with HIV also have a higher likelihood of tuberculosis. The evaluation found that malaria is no longer the killer it once was, nearly all children in Tanzania are vaccinated, and that school health programs have improved.   The health care system was on track to meet most of its 2015 targets for child health, malaria, tuberculosis, and HIV, but efforts to reduce neonatal deaths fell short of expectations. To meet these challenges, the report called on the ministry to promote quality within the system, institute performance management systems, and revive community health programs.