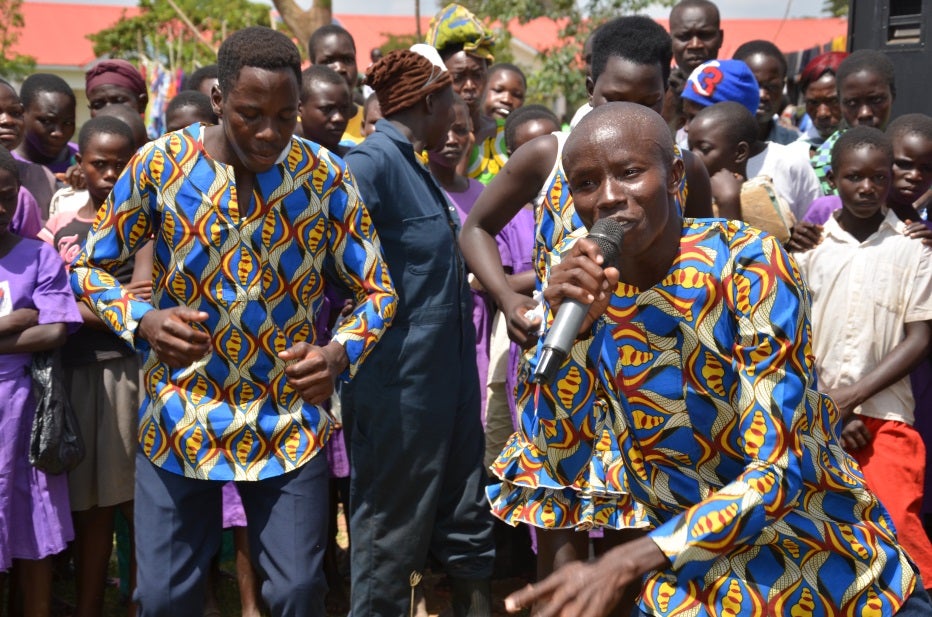 Anthony Okello (right), a storekeeper for Uganda IRS II, performing in Iyolwa sub-county, Tororo District. He formed a music group with three other young people who work for Uganda IRS II and created songs to explain the benefits of indoor residual spraying.

Charles Olupot (left), 24, a spray operator for Uganda IRS II, also is in the music group. “When I heard about the IRS program, I wanted to work to get well. I used to feel sick so much from malaria before IRS,” he said. “Now my family doesn’t fall ill from it.” Photo credit: Laura McCarty, Abt Associates Uganda has the second-youngest population in the world. The median age is 15.7 years, so employing people under 30 is critical to the country’s economy.

The Uganda IRS II project, led by Abt Associates and funded by USAID and the U.K. Department for International Development, protects 3.7 million Ugandans each year with the help of 1,500 younger adults. Part of the team of more than 7,000 temporary workers, they mostly work as spray operators –who spray insecticide indoors to reduce the mosquito population – but also serve as store keepers, guards, community motivators, and data clerks.

These jobs provide not only income, but also training and work experience needed to pursue other income-generating opportunities, which are difficult to find in the rural areas where most people live.

For example, in Northern Uganda’s Amolatar District, a group of young adults is dancing and singing to change the way their community views indoor residual spraying (IRS) and, in turn, improving the overall health of their communities. Known as the International Entertainment Group, it has four members: The composer and lead singer is an IRS storekeeper and the three back-up singers and dancers are spray operators.

‘Always Dreamed of Becoming a Singer’

Anthony Okello, 26, joined the Uganda IRS Project in 2014 as a storekeeper. As a father of two and a village health team member, Okello understood the impact IRS had on malaria transmission. 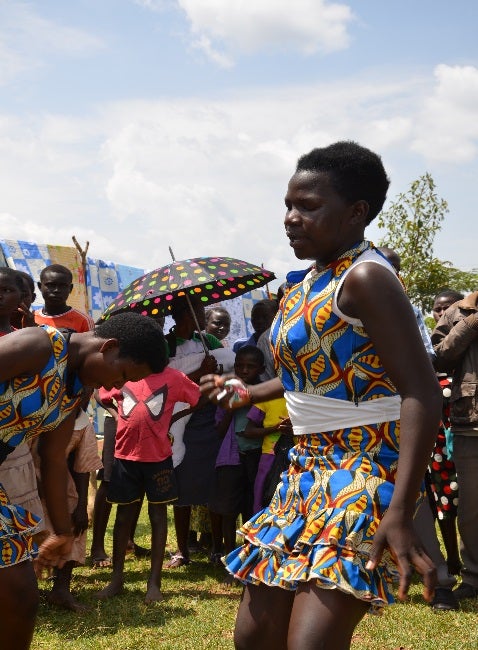 Photo credit: Laura McCarty, Abt Associates “I was responsible for sending in blood samples for malaria detection,” he said. “Before IRS, seven out of 10 cases would be detected as malaria. After IRS, there were only about two or three.” His children rarely get sick now compared to before his home was sprayed by the project.

Okello noticed that many people in his community refused to allow their homes to be sprayed, despite the tangible benefits of doing so. In 2015, he wrote a song about IRS to encourage his community to embrace it. “Some community members did not understand the importance of IRS. I thought, if I write this song, they can pick up messages from it.”

Okello – a former choir member and church leader – had always dreamed of becoming a singer, but could never afford to produce music. With the income he earned from his job as an IRS storekeeper, Okello spent his own money to produce the song. He then asked his fellow spray operators to join him in spreading the message at local markets while the Uganda IRS team helped get the song on local radio. Okello distributed the song to all 27 storekeepers in Amolatar District, where it has been played on market days and at trading centers in the evenings.

“The music helped us a lot to mobilize people for the spray activities,” Okello said. “Many people listened to the music and learned how important IRS is in controlling malaria.”

In 2015, 20 to 30 houses were not sprayed in Okello’s community. In 2017, that number decreased to two.
Focus Areas
Reproductive, Maternal, Newborn and Child Health (RMNCH)
Health
Regions
Sub-Saharan Africa
Jump Forward
Work With Us
Ready to change people's lives? We want to hear from you.
We do more than solve the challenges our clients have today. We collaborate to solve the challenges of tomorrow.
Link