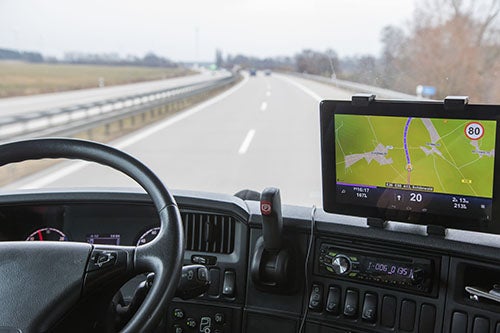 Research by Abt Associates did not discover that truck drivers who use electronic devices to track their mileage faced any additional harassment by carriers.
Photo credit: iStock/Jaroslav Frank The U.S. Supreme Court on June 12 declined to hear an industry appeal of a regulation created to reduce truck driver fatigue, clearing the way for rule implementation. Abt Associates conducted research to examine one possible impact of the rule.

The Federal Motor Carrier Safety Administration (FMCSA) – part of the U.S. Department of Transportation – on Dec. 10, 2015, announced a Final Rule to strengthen commercial truck and bus drivers’ compliance with regulations that prevent fatigue by mandating the use of electronic logging devices (ELDs) by December 18, 2017. ELDs automatically track hours of service, replacing the need to log driving hours on paper.

FMCSA – which has a primary mission of reducing crashes, injuries and fatalities involving large trucks and buses – estimated the rule would save 26 lives and prevent 562 injuries each year from preventing large commercial motor vehicle crashes.

The Owner-Operator Independent Driver’s Association (OOIDA) contested the rule in court, arguing that requiring ELDs on commercial vehicles would violate truck drivers’ privacy, among other concerns. Earlier efforts to mandate ELDs were delayed to examine the possibility that ELDs could increase trucking carrier harassment of independent drivers.

The mandate will impact more than 3.5 million commercial drivers, according to Trucks.com. After the Supreme Court decision, OOIDA pledged to continue fighting the rule by lobbying Congress.

Research Did Not Find More Harassment for Drivers Using ELDs

In 2014, Abt SRBI – now part of Abt Associates – studied whether or not ELD use increases driver harassment. The research was conducted on behalf of the FMCSA and government contractor MaineWay Services.

Abt staff interviewed more than 600 truck drivers at 24 truck stops spread across the continental U.S. and asked them questions regarding the method they use to log their hours of service (HOS) – paper or ELD – the interactions they have with their carriers and dispatchers, and whether they considered those interactions harassment. The key findings were:

The failure to find differences in harassment experiences between drivers who log with ELDs and those who log with paper suggests that ELDs do not lead to greater driver harassment.

The FMCSA also estimated the Final Rule would save more than $1 billion each year, largely by reducing the amount of required industry paperwork. It is expected to increase the efficiency of roadside law enforcement personnel in reviewing driver records and includes strict protections to protect commercial drivers from harassment.