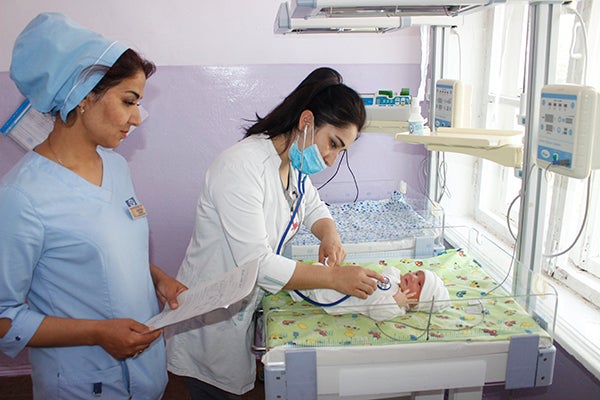 All too often, Dr. Sohiba Abdurakhimova has to make life and death decisions. At only 31, the young and talented obstetrician-gynecologist (Ob/Gyn) manages the the maternity ward of the Qubodiyon Central District Hospital in Tajikistan. It is a heavy responsibility not only because on average 5,000 babies are born there each year, but also because women with serious complications during pregnancy and childbirth are brought to the facility from all over the district. Dr. Abdurakhimova credits the USAID-funded and Abt-implemented Healthy Mother, Healthy Baby (HMHB) Activity with giving her the confidence and skills to make the hard decisions.

For several years, Dr. Abdurakhimova has been collaborating with donor projects to improve maternal and child health by improving the quality of medical services. As part of the projects, Dr. Abdurakhimova took several courses that helped her strengthen her knowledge and gain practical skills. She found the latest training—HMHB’s course on the management of pregnant women in critical conditions (bleeding, eclampsia / preeclampsia)--especially valuable. It helped her resolve many issues that arise during the management of complicated cases. As a result, Dr. Abdurakhimova and the entire maternity ward staff follow new protocols and standards and feel more confident and competent in caring for their patients.

Recently, a 38-week pregnant woman was brought to the hospital with obstetric bleeding. The patient's condition was critical. The fetal heartbeat was erratic. Dr. Abdurakhimova and her team quickly set up an operating room, performed a procedure, and saved the mom and baby. Later that evening, Dr. Abdurakhimova sent a message to HMHB’s trainers stating, “Thanks to the efforts of my entire team and the new knowledge gained during your training on how to treat a pregnant woman with significant blood loss, the mother and child survived.” 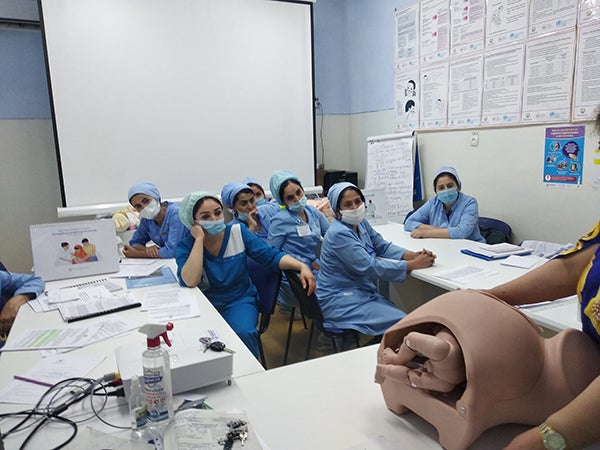 As the leader of the maternity ward, Dr. Abdurakhimova is constantly striving for new knowledge. She actively participates in virtual training and hands-on discussions. For example, since 2012, The Church of Latter-Day-Saints (LDS) Charities has organized training to provide access to global expertise and external advisory support. As part of the activities, certified American obstetrics and neonatology instructors conduct practical and theoretical classes for their Tajik medical colleagues. Unfortunately, due to COVID-19, face-to-face training has not been possible.

Devising creative solutions to continue improving the quality of maternal and newborn care in Tajikistan, HMHB collaborated with LDS Charities in early 2021 to conduct a series of virtual capacity building workshops. Using technology and connectivity provided by HMHB and the LDS Charities-selected US medical experts, they have jointly initiated a series of virtual training courses. The webinars, attended by 24 hospital medical staff, combine thematic presentations from the U.S. experts and case study reviews led by a Tajik provider.

Sharing global best practices combined with an active debate on how to proceed according to the local situation strengthens the knowledge and skills of Tajik doctors to improve the quality of maternal and child health care. In this case, the virtual training boosted Dr. Abdurakhimova’s knowledge and capacity to bring lifesaving care to pregnant mothers and babies when complications arise.