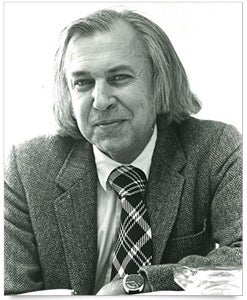 Walter Stellwagen in 1986. Walter R. Stellwagen, the second president of Abt Associates, passed away peacefully on March 10 in Evergreen, Colorado following a long illness. He was 86.

Recognized as an outstanding researcher and statistician, Stellwagen was recruited by Clark Abt, president and founder of Abt Associates, in 1971 to work on and lead the firm’s growing portfolio of housing policy experiments after an academic career that included teaching positions at UC-Berkeley and Michigan State University, the latter as a tenured professor. He had also worked at the newly formed Office of Economic Opportunity headed by Sargent Shriver.

Stellwagen was appointed Abt’s Chief Social Scientist, a position he loved, in 1972. He succeeded Clark as the second president of Abt Associates in 1986 and served until his retirement in 1992. Under Walt’s leadership Abt’s revenue grew from $24 million to $63 million.

Walt was born in Detroit in 1929 and spent his formative years there and in Garden, Michigan on the Upper Peninsula for many summers. An active member of ROTC at the University of Michigan, from which he graduated with a degree in Psychology, he received a Navy commission and sought to train as a fighter pilot, but a bout with Hodgkins lymphoma, while treated successfully, led to his honorable discharge. He held Masters degrees in Psychology and Mathematics from the University of Kansas and a Ph.D in Psychology from Syracuse University.

After retiring from Abt, he moved to Colorado in 1994 and enjoyed many outdoor activities and hobbies. Being a lifelong learner, he audited numerous classes at CU-Boulder and earned the equivalent of several graduate degrees.
Regions
United Kingdom & Europe
Jump Forward
Work With Us
Ready to change people's lives? We want to hear from you.
We do more than solve the challenges our clients have today. We collaborate to solve the challenges of tomorrow.
Link