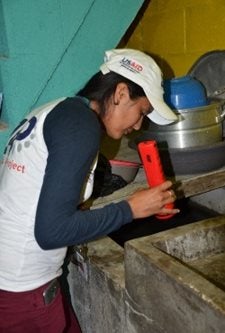 In a quiet neighborhood an hour outside of San Salvador, El Salvador’s capital city, Marisela Ortega leans over Dalila Lissette Castillo’s kitchen water tank. Ortega scours the dark water like a detective, shining her flashlight on the tank’s rim.

After several minutes of inspecting thoroughly, Ortega lifts her head and smiles.

Castillo smiles back at Ortega, who has visited Castillo’s house every 30 days since July to inspect and treat for larvae of the Aedes aegypti mosquito. While all mosquitoes can be annoying, this species transmits dangerous viruses, including Zika, dengue and chikungunya.

Reacting to a Regional Disease Threat

In 2015 and 2016, the Zika virus rapidly spread across the Americas. The virus, often asymptomatic, has been linked to serious birth defects, including microcephaly and neurological damage. In February 2016, with the number of babies born with microcephaly skyrocketing in Latin America and the Caribbean, the World Health Organization declared Zika a global health emergency.

In September 2016, USAID introduced the Zika AIRS Project (ZAP), implemented by Abt Associates, as a vector control response to the emerging infectious disease. ZAP works in El Salvador and eight other countries in Latin America and the Caribbean and provides technical support to Ecuador, Guyana and Barbados.

While the Zika virus no longer is considered a global health emergency – thanks to a multinational response – millions of people remain at risk of infection. ZAP is helping country governments to plan and implement vector control strategies to reduce disease outbreaks and respond to arboviruses quickly. ZAP works across the Latin America and Caribbean region in cooperation with other countries.

“Before ZAP, there wasn’t a program for countries to learn from each other about vector control. ZAP is building relationships among the countries,” said Carmen Vilanova, ZAP El Salvador’s Chief of Party. 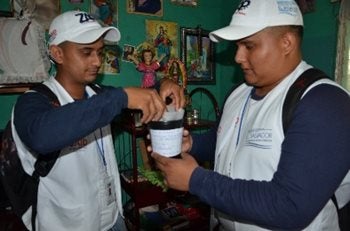 Ortega is one of 350 project technicians in El Salvador working to eliminate breeding sites for the Aedes aegypti. The Aedes mosquito prefers to live in close proximity to households and is a container breeder, which means that it tends to lay eggs in places that collect water, such as buckets, tires, animal dishes, flower pots, and discarded coconut shells. This mosquito can breed in tiny amounts of water, such as the volume in a bottle cap.

To tackle the spread of the virus, ZAP is larviciding with Bti, a naturally occurring bacteria that specifically targets the larvae of the mosquito. Bti can be used around homes and in containers where water collects. Bti-treated water is safe for household needs, including showering, cooking and drinking. Pets can drink water treated with it.

Ortega calculates the amount of Bti needed to apply to Castillo’s tank based on its volume and treats the water. Afterwards, she reminds Castillo to keep storage water containers covered and to check all water containers inside and outside the home once a week for mosquito eggs and larvae.

Before Ortega leaves, she puts a smiley face sticker on a report card she fills out each time she inspects Castillo’s house. This means the house did not have mosquito larvae, while an sad face signifies the household needs to work harder at denying breeding places for the mosquito.

“Since Ms. Ortega began visiting I’ve become more responsible and more conscious of keeping things clean and free of standing water,” said Castillo, a math teacher for six- to -nine-year olds. “Every day I talk to the schoolchildren about picking up trash and being responsible with water to be sure we don’t have breeding sites for mosquitoes.”