Since 1985, Abt Associates has contributed to the global HIV and AIDS response both in the U.S. and abroad.

On World AIDS Day 2015, observed on December 1, the National AIDS Trust encouraged everyone to challenge myths and rethink stereotypes about HIV, among other activities.
Abt’s contributions to HIV-reduction efforts are multifaceted: We advance knowledge about HIV detection and care in the U.S., improve HIV service delivery globally, and get involved locally in efforts to raise awareness and funds to combat HIV and AIDS.

In the U.S., Abt research informs policies for and investments in HIV detection, prevention, and care. 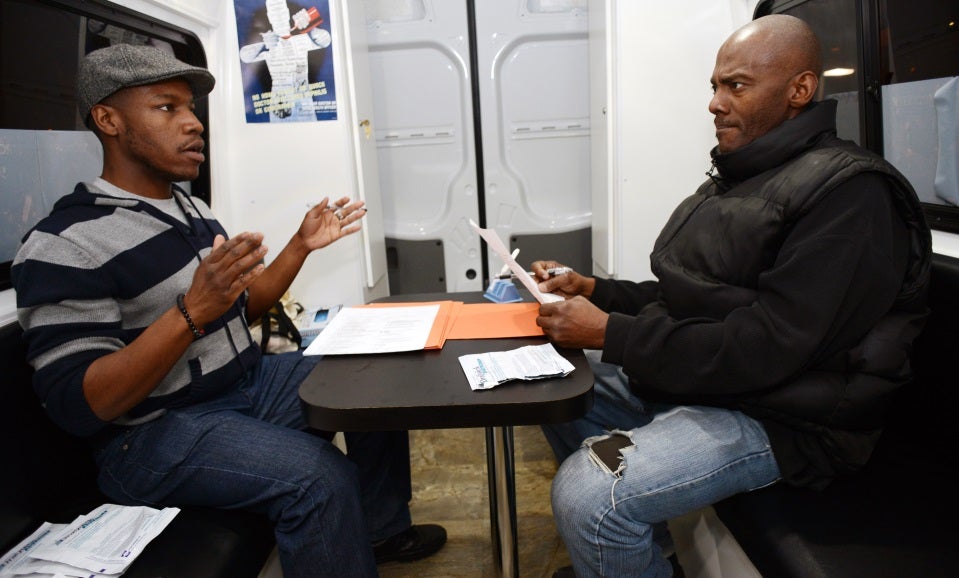 A man (right) in Washington, D.C. gets tested for HIV in a mobile testing van as part of a project to test innovative ways to find HIV-positive people who were unaware of their status. Abt was an evaluation partner for this effort, funded by the Centers for Disease Control and Prevention.
Photo credit: Doug Trapp, Abt Associates

For example, preliminary results from a four-year initiative to find 3,000 previously undiagnosed HIV-positive men who have sex with men (MSM) and connect them to HIV testing and treatment found that using more non-traditional outreach efforts could be worthwhile, according to a presentation by Alex Orr, Associate at Abt, at the American Public Health Associate annual meeting in Chicago. These venues include at-home testing and testing in communities.
This Centers for Disease Control and Prevention-funded project, for which Abt partnered with Emory University, also found that that efforts to find undiagnosed HIV-positive MSM in the U.S. should continue to focus on young, minority men, who are more likely than other demographic groups to be untested and HIV positive.

Also in the U.S., Abt is examining the impact of the ACA on services provided by Ryan White HIV/AIDS Program (RWHAP), which assists people living with HIV. So far this research has found mixed impacts by the Affordable Care Act (ACA) on Ryan White services, according to a recent presentation by Abt Senior Associate Michael Costa. The research is addressing questions regarding the effect of the new insurance programs under the ACA on Ryan White services.

The research found, for example, that the numbers of uninsured individuals receiving services through RWHAP decreased under the ACA. However, Ryan White program services are still critically important in providing the full range of services need by people living with HIV/AIDS, even after the implementation of the ACA. However, Ryan White service providers in states which didn’t expand Medicaid said their patients, most of whom would have qualified for Medicaid, did not benefit significantly from the Affordable Care Act.

Abt also partners with governments, civil society organizations, the private health sector, and others to create national HIV strategies and budgets and strengthen health systems around the world so that people living with HIV can access quality health care and services.
Abt led the Clinical HIV/AIDS Services Strengthening Project in Sofala, Manica, and Tete (CHASS-SMT) from 2011 to 2015, which greatly increased access to HIV services. The project built the capacity of local health systems in Sofala, Manica, and Tete Provinces to provide quality HIV and AIDS services. For example, the number of people receiving HIV testing in these provinces reached 230,000 in 2015, a ten-fold increase since 2012. This was possible in part because 127 new sites offer HIV treatment.

Abt is one of eight firms implementing the global Strengthening High Impact Interventions for an AIDS-free Generation (AIDSFree) project, a five-year effort that began in 2014 and is funded by the President’s Emergency Plan for AIDS Relief (PEPFAR). The project, led by JSI Research & Training Institute, is working to expand access to Voluntary Medical Male Circumcision in Namibia and access to HIV treatment for children through the private sector. 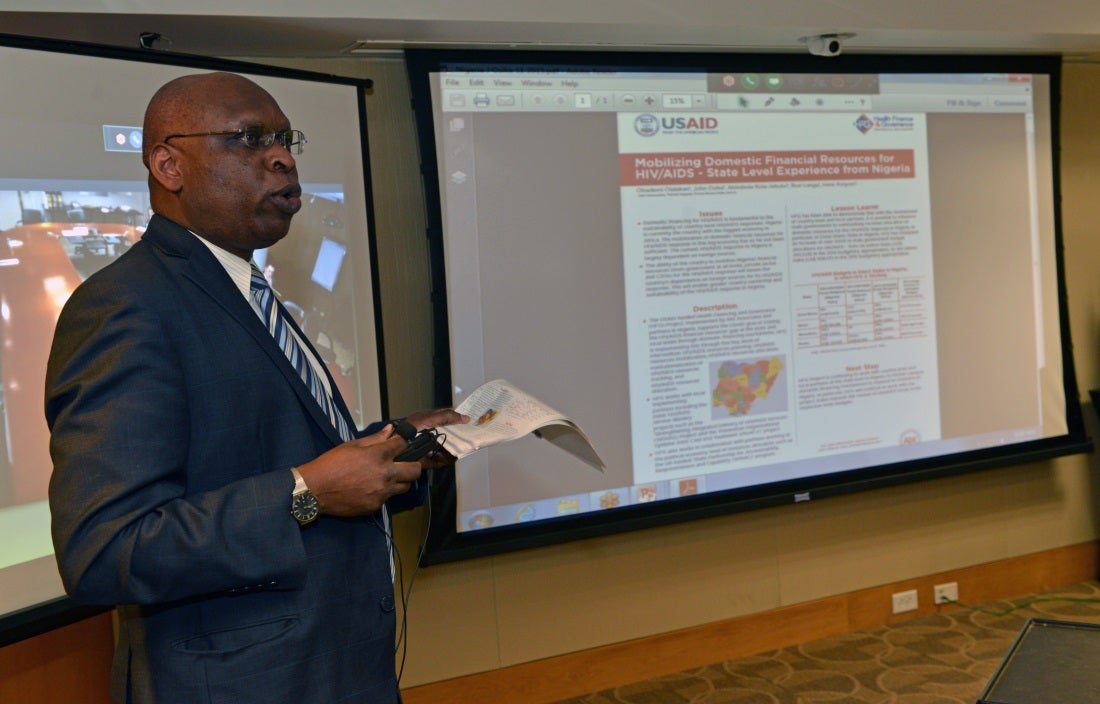 On World AIDS Day 2015 Abt Associates staff in Bethesda, Md. Cambridge, Mass. and elsewhere presented their recent work on HIV to others at Abt. John Osika, Principal Associate for International Health, gave a poster presentation on local funding for HIV services in Nigeria.
Photo credit: Doug Trapp, Abt Associates

The Abt-led Strengthening Health Outcomes through the Private Sector (SHOPS) Project has initiated a variety of efforts in HIV and AIDS with a focus on increasing country ownership and sustainability of the HIV response by supporting evidence-based approaches in private sector service delivery and more effective use of local resources.

And on October 24, a 17-member Abt team joined the Walk to End HIV in Washington, D.C., which was organized by and benefits Whitman-Walker Health, a non-profit community-based health organization which provides dependable, high-quality, comprehensive and accessible health care to those infected with or affected by HIV and AIDS.

Read more about Abt’s work in HIV and AIDS: