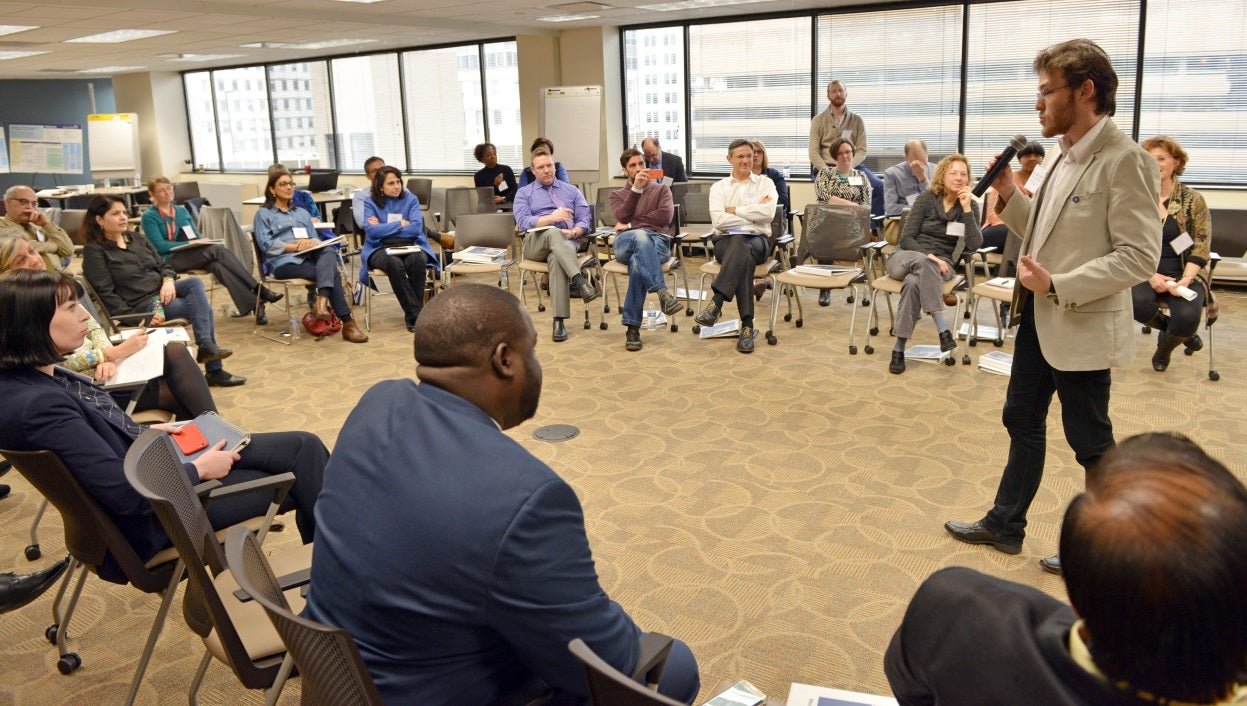 Ronaldo Jose Pineda Wieselberg, who has Type 1 diabetes, tells his story during a HealthRise Global Stakeholder event at Abt Associates’ Bethesda office in February 2016.
Photo credit: Doug Trapp, Abt Associates For World Health Day 2016 on April 7, the World Health Organization is increasing awareness about the growing global burden of diabetes, which causes more than 1.5 million deaths each year. But how many people have diabetes and live full productive lives in spite of or even because of their disease?

The HealthRise program – led by the Medtronic Foundation, Abt Associates, the Institute for Health Metrics and Evaluation, the Human Sciences Research Council, and Instituto Sírio-Libanês de Ensino e Pesquisa – is turning to patients to hear their stories about living with chronic non-communicable diseases (NCDs) such as diabetes and cardiovascular disease (CVD) and to help more individuals successfully manage their conditions over the long term.

Meet Ronaldo, Arunav, and Denise, three inspiring individuals from Brazil, India, and the U.S. who have shared their stories with HealthRise and demonstrated how they are not just living with diabetes – they are thriving with diabetes.

A Condition Becomes a Mission

When Ronaldo Jose Pineda Wieselberg was two, he told his mother he wanted to be a doctor. A math teacher, she went back to correcting papers, and he returned to his cars and jigsaw puzzles. Two weeks later, he was diagnosed with Type 1 diabetes. The disease cemented his decision. Now 24, the Brazilian native is a medical school grad, an intern at Holy House of Mercy in Sao Paolo, and an aspiring endocrinologist.

But no one knows better than him that he is carrying a death sentence. “Type 1 is bad luck because your body is attacking yourself,” he says. “There is no known cause and no way to prevent it.” 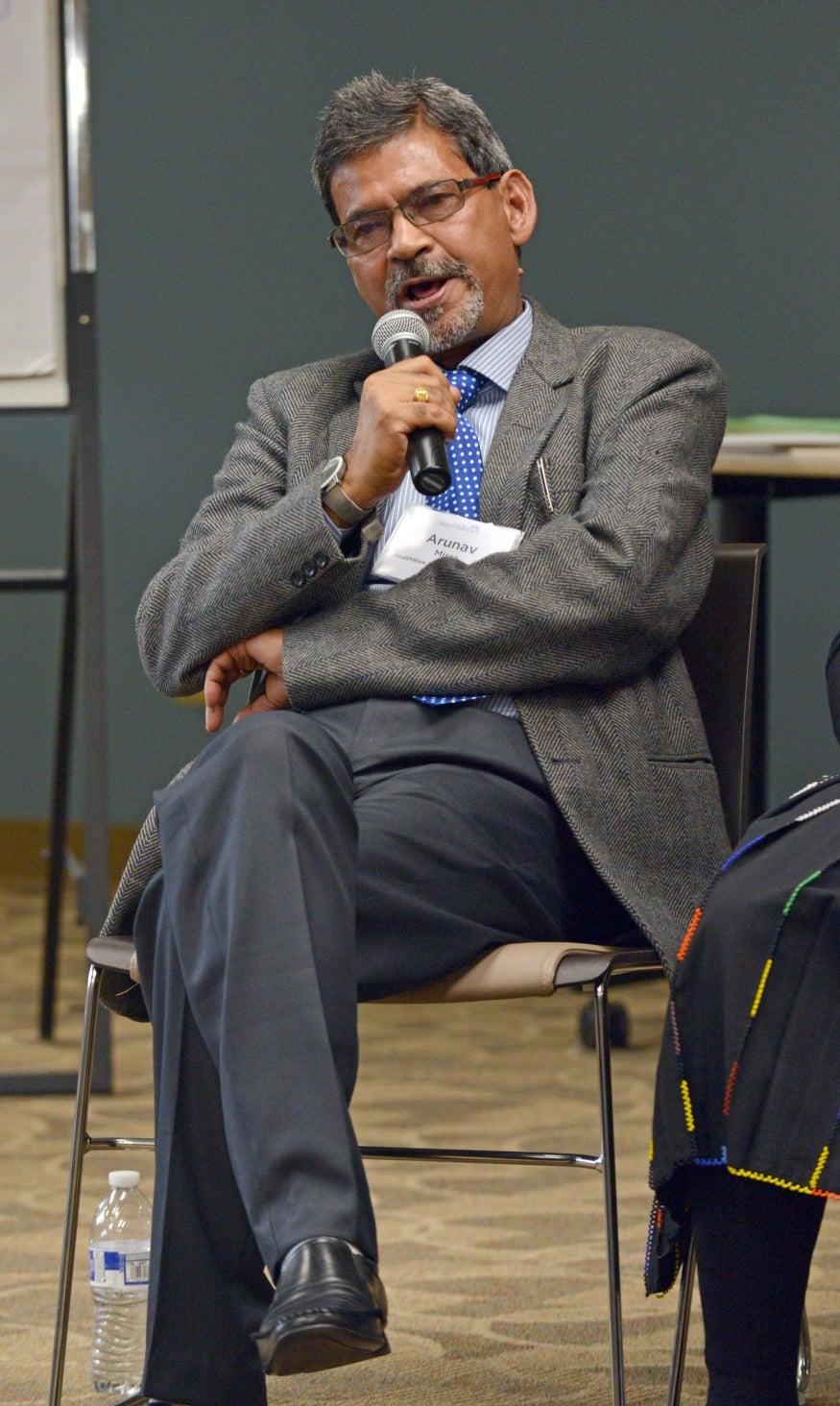 Arunav Misra described how rescuing people during a 2001 earthquake in India led to a steep decline in his health. Misra spoke during a HealthRise Global Stakeholder event at Abt Associates’ Bethesda office in February 2016.
Photo credit: Doug Trapp, Abt Associates When he attended the 2011 funeral of a friend who had died of acute complications from diabetes, he sat next to his terrified mother. She hugged him and pleaded with him to take care of himself. At that moment, he realized his mission: to fight for people with diabetes. He started to look for information, prowling the National Institutes of Health website and other medical links. To his dismay, the information was tailored to health care professionals, not to patients. From then on, he engaged with every project he could to help provide diabetes training for youth to try to contain the diabetes and obesity epidemics.

“Nobody should die of diabetes for lack of information,” declares Wieselberg, who is International Diabetes Federation Regional Chair-elect for South and Central America. “Information is the treatment.”

‘I Can Do Anything’

For Arunav Misra, it was a rapid descent. The 62-year-old Delhi-based environmental consultant had raced with a volunteer squad to the Gujarat earthquake site in January 2001. He lifted 100 dead bodies from the debris. Some days he couldn’t eat or sleep. After 15 days, a stressed-out Arunav returned home with pain in his heart and stomach. The diagnosis: diabetes. That led to a mental breakdown — and months of depression, frustration, and agony as his life was disrupted. “I lost my health, wealth, weight, business and social connections, and enthusiasm,” he recalls.

He reached his nadir on December 31, 2002. He was at home with his family when his 14-year-old daughter Pragya asked him what his New Year’s resolution was. He replied that he had no hope, no expectations for the coming year. Then Pragya gave him an earful. Showing wisdom beyond her years, she told him that he had done a lot for his family, his community, and his industry. It was time for him to do something for himself—and the family would help.
Misra quit chain-smoking and added yoga, vegetables, and medicines to his daily routine. With his family’s support, he put weight back on and rejoined his businesses, which now are better than ever. 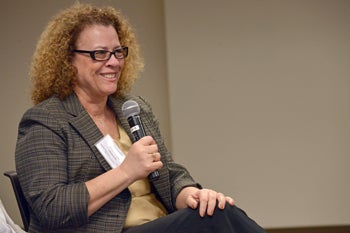 Denise Mazone spoke about her family history of diabetes during a HealthRise Global Stakeholder event at Abt Associates’ Bethesda office in February 2016.
Photo credit: Doug Trapp, Abt Associates

For Denise Mazone, diabetes was destiny. Her grandmother was a diabetic and eventually gangrene required a leg amputation. Her mother graduated from pills to insulin. But her fried-food diet helped produce fatal heart failure and renal failure. Would Denise be next?

Two spinal fusions and the resulting steroid treatment elevated Denise’s blood sugar. At least she hoped it was the steroids. It wasn’t. When her doctor told her she had Type 2 diabetes, she cried.

When she got the diagnosis, the 55-year-old Golden Valley, Minn., realtor thought, “I don’t want to be part of that circle of life.” That doctor helped her avoid the fate of her mother and grandmother. She signed up for nutritional classes and dropped from 205 lbs. to 165 lbs. She and her doctor correspond by email and he is a good listener at her appointments. “The most important thing is having that connection with him,” she said. Denise refers people to her doctor, but he says he has enough patients. Fortunately for Denise, he has enough patience, too.