World Population Day, created by the United Nations (U.N.) Development Program in 1989, is a call to focus on population issues, such as reproductive health and family planning.

Abt Associates leads a number of projects that improve access to and quality of family planning and reproductive health (FP/RH) products and services, such as:

Abt incorporates internationally proven best practices and applies evidence-based, data-driven tools to support the delivery of quality FP/RH services, focusing primarily on poor and underserved populations. Abt also facilitates conversation and collaborations between the public and private health sectors.

Read more about Abt’s efforts below.

Note: “other” sources are a friend, relative, or the church.

Meeting Demand for Contraception among Adolescents: the Role of the Private Sector

Improving access to family planning is critical to improving lives of young people around the world. Each year, girls under 18 give birth to more than seven million children. Unplanned pregnancies result in 3.2 million unsafe abortions among adolescents each year.

These findings will be detailed in a forthcoming publication.

Learn more about SHOPS’ research and evaluation and SHOPS’ work in family planning and reproductive health.

Improving the Uptake of Quality Family Planning Services in Jordan

Jordan has more than 6.5 million people, an annual population growth rate of 2.2 percent and a large influx of refugees, making it one of the fastest-growing countries in the world. Although more Jordanians are spacing births and using contraception than in the past, the country’s fertility rate of more than three births per woman slows progress in the country’s socioeconomic indicators. Health Center staff in Jordan present the results of interventions supported by the HSS II Bridge project that are improving the quality of and access to family planning services for Jordanian families.
Photo credit: HSS II Bridge The HSS II Bridge project implemented a Family Planning Service Delivery Improvement Collaborative,  a strategic and comprehensive approach to improve the quality of and access to safe motherhood and family planning health care services for Jordanian families in 24 health centers and six hospitals run by the Ministry of Health (MOH).

HSS II Bridge’s approach was to assist teams of health providers in these facilities to analyze their own data; identify gaps in their services; develop and implement change packages to improve their performance; monitor the effects and adjust interventions, meeting periodically with other teams to present their progress and learn from each other. Evaluators also tracked the family planning performance of 24 non-participating health centers over the same period as a benchmark.

“Overall, HSS II Bridge promoted in-depth analysis of systems and processes for delivering family planning and helped institute  changes to obtain better results in each of the participating  health centers and hospitals,” said Sabry Hamza, HSS II Bridge project director. “The results prove the activities of the project are credible, observable, and doable.”

Highlights from this intervention under HSS II Bridge include: 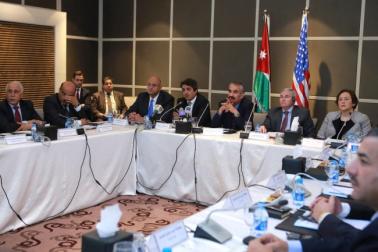 The Abt Associates-led J-CAP project facilitated a discussion in May among governors in Jordan about their role in achieving the country’s population and development goals.
Photo credit: J-CAP project USAID supports the Jordanian government’s efforts to realize the demographic opportunity by enabling the policy environment and generating demand on essential health care services including family planning and reproductive health.

Jordan’s governors met in May to discuss the role of governorates in achieving the country’s population and development goals. The meeting was facilitated by the Abt-led, USAID-funded Jordan Communication, Advocacy and Policy Activity (J-CAP) project, in partnership with the Ministry of Interior (MOI) Local Development Directorate.

Meeting participants discussed the impact of population growth on local development and how Jordan’s persistent high fertility – which averages more than three children per woman – poses a heavy burden on the country’s ambitious socio-economic goals. Governorates in Jordan are unevenly affected by socio-cultural traditions, population growth, economic opportunities and the influx of Syrian refugees.

USAID Deputy Mission Director Chris Crowley highlighted the importance of the partnership between the two governments in achieving population and development goals.

“Family planning should be considered a means for improving women’s and children’s health, benefiting economic development and decreasing the burden on already-stretched natural resources,” Crowley said.