Rockville, Md.  –  A new study finds that New York City’s two-month shutdown during COVID-19—while undeniably painful—could point the way toward saving thousands of lives through improved air quality, generating billions of dollars in related economic benefits in the process. Neighborhoods with higher percentages of low-income residents or higher percentages of Black or Latinx residents likely would benefit more from the reduced particulate matter concentrations. The study’s findings are published in the journal Environmental Research.

During the initial shutdown from March 15 to May 15, researchers from Columbia University, Abt Associates, and ZevRoss Spatial Analysis estimated a citywide 23 percent reduction in fine particulate matter (PM2.5 ) concentrations. This was attributable to an estimated 60 percent decline in automobile traffic, as well as declines in air traffic, construction, restaurant operation and electricity generation. They then extrapolated ambient levels of PM2.5 during a five-year period. Using data from the U.S. Environmental Protection Agency, the research team quantified the economic value of estimated avoided cases of air pollution-related illnesses and deaths.

“We know people are healthier when their air is cleaner, and when they are healthy, they earn more,” said Abt Associates’ David Cooley, a co-author of the report and expert on climate change and air quality. “This study models a scenario that captures not only the health benefits of clean air for children and adults, but the benefits of avoiding the cost of air pollution-related illnesses, and the benefits to people in different economic and racial demographics.”

Health Benefits
The study itself is innovative because it includes impacts on children and infants, cohorts that are typically left out of health benefits assessments of air pollution control and climate change mitigation strategies. These include:

Environmental Justice Benefits
The results show that low-income, Black, and Latinx neighborhoods would receive a higher share of the total benefits, in part because those neighborhoods already suffer disproportionately high rates of negative health outcomes. Divided solely by income, neighborhoods:

When looked at through the prism of race:

“The tragedy of COVID-19 has inadvertently given us a look at how we might examine the health benefits of efforts to reduce air pollution and mitigate climate change,” said Cooley. “We’ve conducted many studies on the health and financial impacts of air pollution and climate change, but simulating this scenario demonstrates how improving the environment can address the inequities facing communities of color and eliminate serious—and costly—health issues for adults and children.”The study, produced by Columbia University Mailman School of Public Health, isn’t an estimate of the benefits of the pandemic itself; rather, it identifies aspirational policy goals to reduce emissions.  The research was supported by grants from the Environmental Protection Agency and National Institute of Environmental Health Sciences, the John and Wendy Neu Foundation, the John Merck Fund, and New York Community Trust. 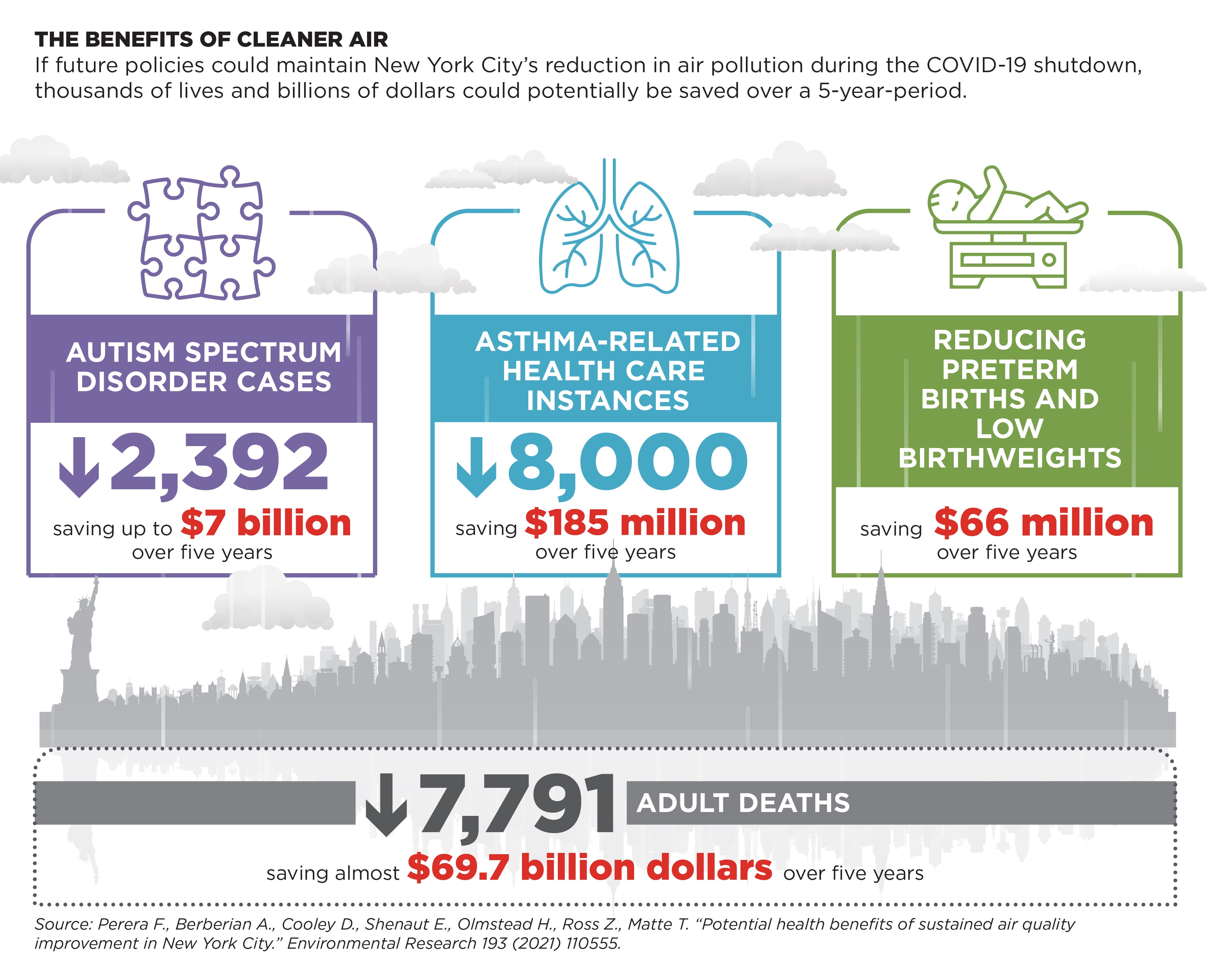