When I started at Abt Associates recently, I had the pleasure of joining a behavioral health project focused on HIV.

I quickly boned up on the subject and in particular learned a great deal about the effectiveness of syringe service programs (SSP) in solving seemingly intractable health problems. I marveled at how programs with indisputable public health benefits still could be mired in political controversy. Decades of research in the U.S. and abroad show that SSPs reduce transmission of HIV and Hepatitis C virus (HCV) and increase the number of individuals accessing medical and behavioral health care. Studies show that SSP participants are five times more likely to enter drug treatment and 3.5 times more likely to cease injecting compared with those who do not use these programs.

In addition, research shows that SSPs have led to 50% reductions in HIV and HCV incidence in their respective catchment areas. For instance, SSPs in Philadelphia and Baltimore are estimated to have prevented more than 12,000 new cases of HIV over a 10-year period. Public health researchers who have studied these programs say the case for them is overwhelming. “There are few things in public health where clearly modest amounts of investment save tremendous amounts of money later on,” says Dr. Don des Jarlais, professor of epidemiology at the NYU School of Global Public Health. “The current best estimate of the life-time cost of just providing medical treatment for HIV infection is about $488,000. A clean needle costs 10 cents, give or take a little.”

Yet as pivotal research in the 1990s about SSPs’ benefits led communities, mostly in urban areas, to develop programs, opposition persisted. SSPs have remained contentious among political and social leaders, in part due to the stigma tied to injection drug use. Other obstacles to SSPs included local community resistance and federal drug paraphernalia laws and local enforcement that criminalize the distribution of equipment that will knowingly be used by an individual to consume illicit substances.

The opposition slowed the spread of SSPs. It posed funding challenges and prompted SSPs to, at times, operate away from the public gaze or develop workarounds to restrictive policies. The stigma has led to the indefinite suspension of some local SSPs, to the detriment of public health. But the current opioid epidemic and expected rise in substance misuse from the stress of COVID-19 make widespread implementation and scale-up of SSPs critical, especially in rural and suburban communities.

SSPs, which are also known as needle exchange programs (NEPs), syringe exchange programs (SEPs), and syringe access programs (SAPs), are comprehensive community-based programs that reduce HIV transmission and link clients to health and social services. Steeped in the tradition of harm reduction, effective SSPs operate under the central tenet of “meet clients where they are.” That means accepting and engaging participants regardless of their current health status or drug use and providing tailored interventions based on the beneficiary’s status. This approach carries far more public health benefits than offering a choice of either forced treatment or barred access to services, including syringes, condoms, bleach or other life-saving tools.

The harm reduction perspective often influences SSPs to put public health at the center of their approaches as they implement needs-based distribution models, maintain low threshold access to services, and promote secondary distribution to peers in the community. Needs-based distribution allows participants to receive as many syringes as they need, regardless of the number of syringes that they return, and carries more public health benefits than restrictive one-for-one exchanges. Low threshold access refers to services that have a low barrier to entry and minimal requirements of participants accessing services. Secondary distribution is the distribution of sterile syringes from an SSP participant to their peer networks. 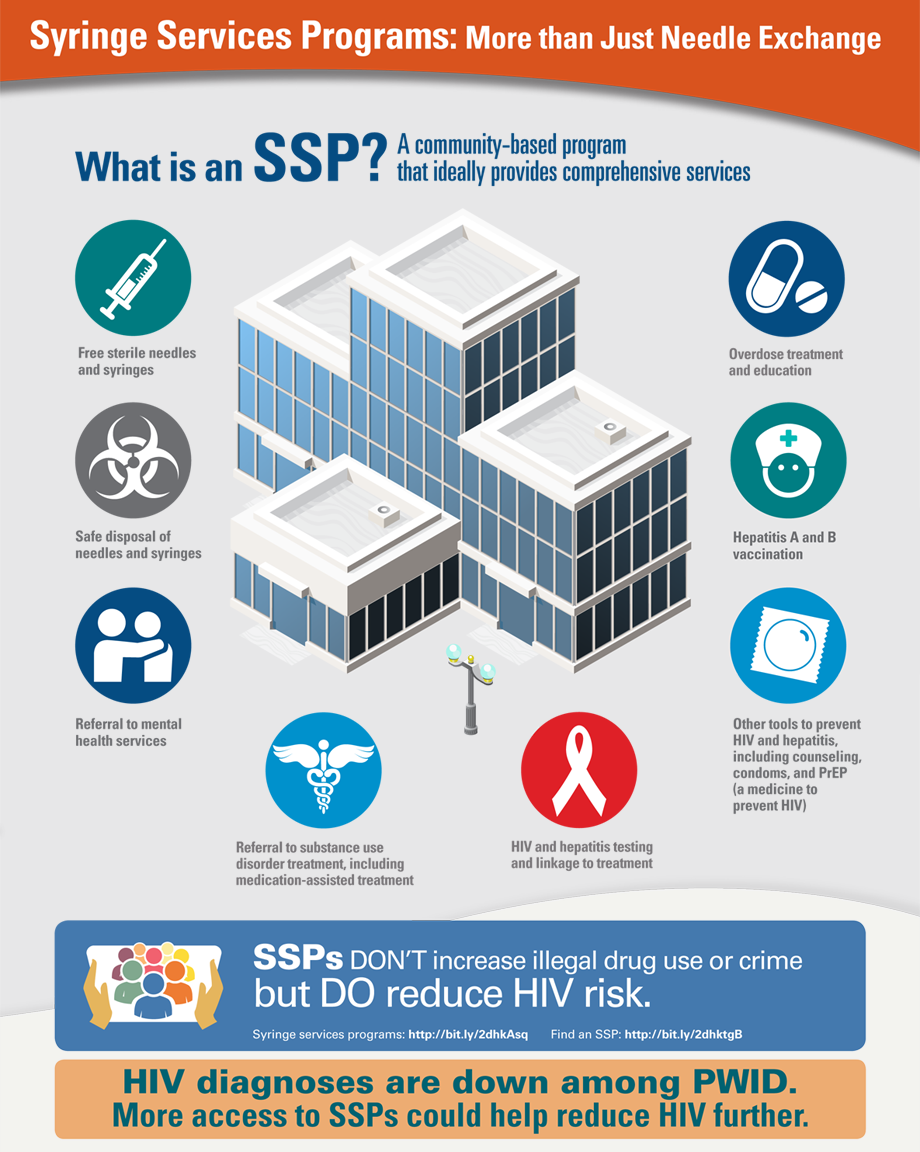 What the Research Tells Us

Research and science make clear SSPs’ benefits. They not only are safe, proven, and effective interventions that reduce the transmission of HIV, but they also serve as an entry-point to vital medical and behavioral health treatment for people who inject drugs (PWID). Through promoting the increased circulation of sterile syringes in a community, SSPs are strongly associated with reductions in risky injection behavior. SSPs that promote needs-based distribution and secondary distribution further increase their reach, service coverage, and effectiveness in preventing infectious diseases. SSPs also play a critical role in linking PWID to health and social services and participants’ decisions to enter drug treatment or stop injection drug use.

SSPs in the Current Climate

While SSPs have been in operation in the U.S. since the late 1980s, mostly in urban areas, the current opioid and infectious disease syndemic in the U.S. has prompted increased interest at the federal and local levels. SSPs are now a key part of the federal Ending the HIV Epidemic initiative to reduce new HIV infections in the U.S. over the next 10 years. Several local governments in rural communities have also pushed for the adoption of these programs with the recognition of their benefits and their importance in the fight against the opioid epidemic. 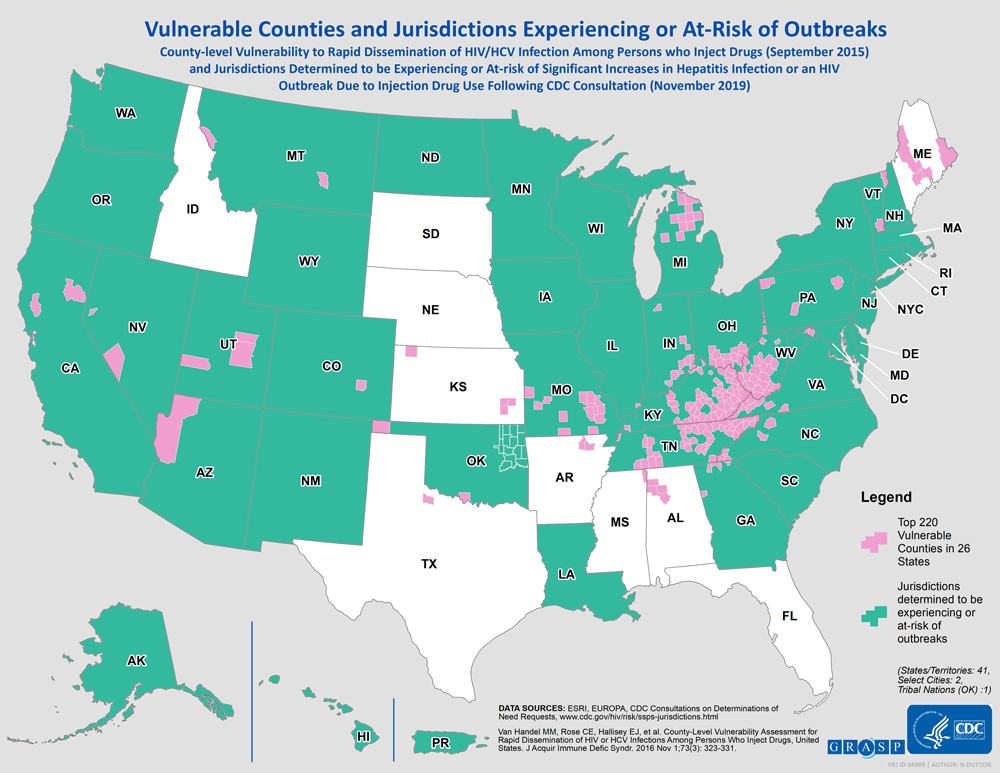 As I have spent time on my projects, I have come to view SSPs as a true embodiment of public health. Data show that they possess incredible power to prevent some of the most deeply entrenched health issues of our day. SSPs link participants to critical care and services and promote integrated care, especially in drug treatment programs. As comprehensive and critical interventions, SSPs exemplify person-centered care that strives to meet the health and social needs of their participants.

The ongoing opioid and infectious disease epidemics in the country have left rural communities particularly hard hit. It is especially important to bolster and scale-up SSPs in these communities. Policy decisions surrounding SSPs and drug paraphernalia laws should take in account the vast body of domestic and international research, which points to similar conclusions: SSPs are a critical public health and harm reduction measure for reducing the transmission of infectious diseases. For researchers and non-researchers alike, the answer should be clear: shoring up community resources and bolstering access to SSPs are vital to ensuring the resiliency of our communities in the days to come. I hope that my Abt colleagues and I can contribute to that brighter future.