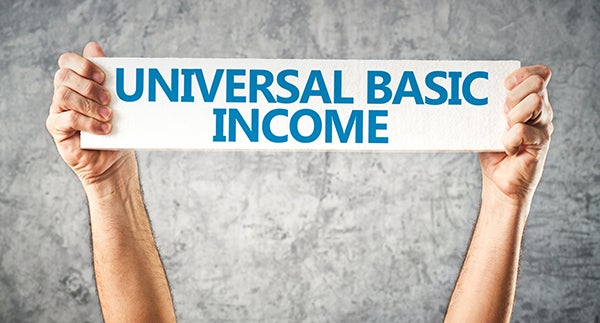 A universal basic income (UBI) is a regular, substantial, and unconditional cash income available to everyone, irrespective of their employment status or wealth. Its promise is the end of poverty as we know it. In contrast to more traditional forms of assistance, recipients are not required to be anything (e.g. poor, unemployed), do anything (e.g. work, go to school), or use the money for any specific purpose (e.g. food or housing) in order to receive its benefits.

But although the idea’s soaring aspirations have captured the attention and praise of notables as varied as Thomas Paine, Martin Luther King, Jr., and Milton Friedman, significant practical obstacles have hampered efforts to put it into practice, or even to test it. Consequently, we still have very little idea whether or how the idea would actually work in the United States. Ongoing privately-funded evaluation efforts of scattered tests in California are unlikely to change that. We need new and rigorous efforts.

Extant Research on a UBI is Scant

The UBI is, of course, only one of a number of extant public policy innovations intended to alleviate or end poverty and its most ruinous consequences. Given its seeming simplicity and potential impact, however, it has proved a persistent idea, and has drawn significant and growing public attention in recent years. Most modern versions of a UBI are framed to address a rise in non-employment as well-paid low-skilled work disappears or is automated. Both ongoing California demonstrations to examine UBI (in Oakland and in Stockton) are largely funded by Silicon Valley philanthropists particularly concerned with these twin trends.

But rigorous evidence of a UBI’s impacts remains scant. Past research has typically examined transfers that have not been universal (instead narrowly targeted, mostly exclusively to people in poverty), not basic (insufficient funds to cover basic human needs), and/or not long term (undermining the idea that recipients can count on the funds and make life-altering plans). Further, past studies were often descriptive, rather than built around random assignment—the gold standard in evaluation (see Table 1). 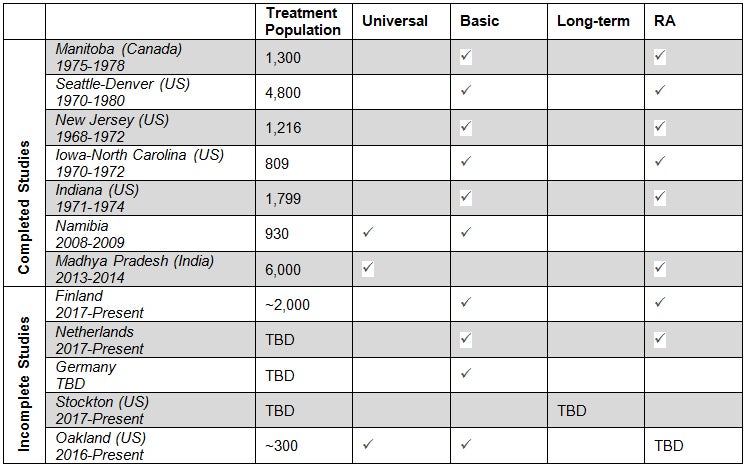 Notes: RA is random assignment. TBD is to be determined. This table was adapted from a table originally created by Give Directly, and updated by the authors to reflect data newly available on the studies in progress in Oakland, Stockton, and Finland, respectively.

For example, the largest ongoing U.S. study of a UBI, in Oakland, Calif., with its short-term design and sample of just a few hundred families in one U.S. city, cannot be expected to measure how people react to a permanent guarantee of subsistence income—which is critical. And the effort in Stockton is focused primarily on low-income families, which again defines the program more narrowly than its aspirations.

The overall finding of the best evidence is that some people are slightly less likely to work when their basic needs are met. But beyond the small negative effects on work, we know very little about a range of other effects of a UBI. Do people spend more time with one another? Start community organizations? Move? Send their kids to different schools? Feel happier? Eat better? Start businesses? Do decisions change if the UBI is taxed, or if the UBI reduces other benefits? We don’t know—yet.

Of course, some would say that it’s not clear whether a social program of this scale and ambition is necessary at all. Existing transfer programs, including Social Security Disability Insurance, Medicaid and SCHIP, the Earned Income Tax Credit, Temporary Assistance for Needy Families, and a variety of food and housing assistance programs, already exist to address many of the problems a UBI professes to solve. But a UBI is categorically different from these programs. Central to its logic is that you can count on it to make choices about your future, and that, unlike other social benefit programs, it does not deter work by reducing benefits when you earn more.

A New Test is Needed

A new and rigorous test is needed. One straightforward way to test a UBI in a smaller scale demonstration would be through an existing federal channel, such as the IRS or Social Security Administration, or similar state channels. The Earned Income Tax Credit and advance credits for health insurance offer precedents for distributing tax credits to citizens on a monthly basis or at year-end, with annual reconciliation at tax time. One could evaluate such a strategy in the near term by involving states in the design and recruitment process for the study, and perhaps by allowing a subset of participants to renounce claims to other state benefits for the duration of the study. This kind of design would allow research on a UBI to advance in the absence of federal action, while remaining relatively low-cost for participating states.

There is, of course, only a very small chance that the United States will ever implement a nationwide UBI. But that small chance carries with it enough promise to merit serious, sustained conversation, and a new and ambitious test of its impacts. We welcome the opportunity to participate in that discussion.