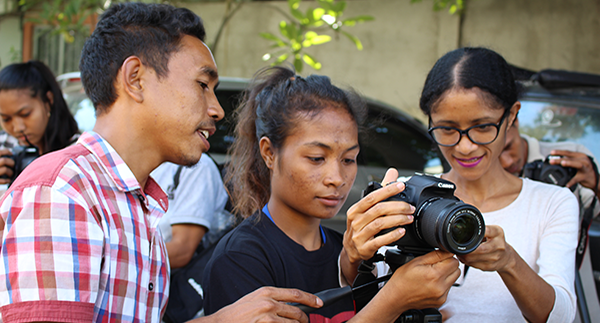 Zelia dos Santos is a motorcycle mechanic with her own workshop. When asked about her drive to pursue this work, she candidly delivers her answer with a smile, “I opened the workshop, not because I learned how to be a mechanic. I just liked it.”

This is exceptional, not just because she is a woman excelling in a field outside the gender norm, but particularly because Zelia lives in a rural area of Timor-Leste, Asia’s youngest country. This new nation carries a heavy history of injustice and oppression through Indonesian occupation, following a long tenure of Portuguese colonialism. Today, development sector investments are working to build a stronger foundation for women like Zelia.

One such investment is Partnership for Human Development Australia Timor-Leste (PHD), a 10-year program funded by the Australian government and managed by Abt Associates Australia. An innovative new facilities approach, PHD combines previously separate investments to work together in cross-sectoral collaboration, with the overarching goal of improving the wellbeing of the people of Timor-Leste.

PHD’s work is expansive. But, what about the contributions Timorese people are making to their own country’s progress?

What about the roles of women in rural areas, as leaders within their communities?

What about tapping into a new generation of storytellers to capture these narratives?

What about focusing on individual stories such as Zelia’s?

In search of answers to these questions, PHD launched the Student Short-Film Competition on International Women’s Day in March 2017.

A Different View of Development

PHD’s Student Short-Film Competition is a first-of-its-kind in Timor-Leste.

The contest had a screening and awards ceremony celebrating International Day of Rural Women in October 2017.

The short-film competition is exceptional in how it empowers two types of storytellers. There is the rural woman herself, standing in front of the lens vocalising individual and impactful contributions to the development of her own country. Simultaneously, young aspiring filmmakers are positioned behind the camera crafting a narrative to be shared -- thanks to social media -- with a global audience, furthering visibility.

The results of this first competition are remarkable. Showcased among the winning films is a veteran who opened her own primary school, a mother who spends her days enriching the lives of people with disabilities and the aforementioned self-taught female motorcycle mechanic, aka “shecanic,” who uncovered her calling when fixing her husband’s motorbike.

The Australian Ambassador and the Spouse of the President of Timor-Leste debuted the short-films to an eager audience including members of Government, Parliament, non-government organizations (NGOs), private sector sponsors, along with the journalism students and rural women featured. The videos were also shared on PHD’s Facebook page for a ‘popular vote’ contest, which went viral reaching nearly 150,000 people, over 40,000 views and 8,500 reactions, comments and shares.

Clearly a success in its first year, the competition is running again in 2018, providing a new cohort of journalism students with opportunities to enhance their skills and capabilities while also amplifying the voices of rural Timorese women.

Zooming Out, Looking Beyond

In PHD and elsewhere in development, we have a responsibility to think about who is speaking and about who is documenting. We must foster discussions about where, when, why and how footage is being used. These are the questions that development programs should be asking, not just within the communications arena, but on a program-wide scale.

How can our work amplify the voices of people who are marginalised? How can we engage with emerging creators and unconventional storytellers? The cross-section of examining these questions can produce a remarkable view.