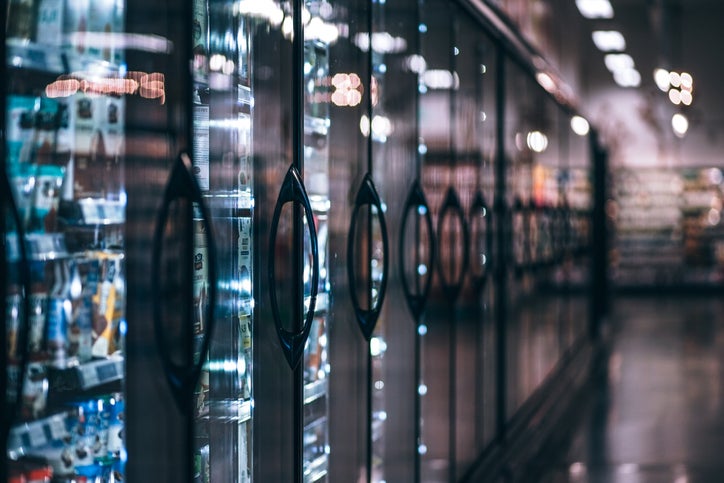 The U.S. government’s recently approved omnibus appropriations package has benefits beyond a boost to the economy: it includes the American Innovation and Manufacturing Act, which paves the way for the United States to begin phasing down production and consumption of hydrofluorocarbons (HFCs).

HFCs are super greenhouse gases (GHGs) that have global warming potentials several thousand times greater than carbon dioxide, the most common GHG. And not only are they more potent than “typical” GHGs, they’re in regular use by a common retail sector: food retailers. Some supermarket refrigeration systems hold up to 3,500 pounds of refrigerant. One of the most common refrigerants today (R-404A) has an impact on climate that is nearly 4,000 times more powerful than carbon dioxide on a pound-for-pound basis. Unfortunately, many supermarket refrigeration systems leak as much as 25 percent of their refrigerant charge each year. For example, a single store using a R-404A system, may release 875 pounds of its HFCs annually, the equivalent of as much as 3.4 million pounds of carbon dioxide, which is equal to the emissions from 336 passenger vehicles in a year according to the Environmental Protection Agency’s (EPA) Greenhouse Gas Equivalencies Calculator. That’s the impact of just one hypothetical store; imagine that impact multiplied (there are roughly 37,000 grocery stores in the United States).

In Need of a Fresh Start

Project Drawdown identifies refrigerant management and the use of alternative refrigerants as two of the most impactful GHG mitigation solutions in the industrial sector. With the new legislation attached to the appropriations package, the EPA is authorized to begin regulating high-GWP HFCs, with an aim towards reducing their use in key food retail sectors, such as supermarkets, convenience stores, and small grocery stores. The good news is many food retailers began to transition away from high-GWP refrigerants years ago. These transitions were in response to shareholder demands for smaller carbon footprints; to meet state regulations adopted in California, Maryland, and elsewhere; and in anticipation of the federal action we will soon be seeing. But many others will be starting the transition from scratch. Unfortunately, there is no one-size-fits-all solution for food retailers that want to avoid a situation where they are struggling to find reasonably priced HFC refrigerant to replace lost charge in an environment where production and consumption has been curtailed.

These companies will wrestle with difficult questions about what refrigeration systems to use, which vendors to hire, what replacement refrigerants to invest in, and whether to retrofit existing systems or renovate old stores. Refrigeration systems have long lifespans – more than two decades in some instances–which increases the need to get these decisions right. Selecting a system type-refrigerant combination as the prototype for all new stores, for example, has huge implications for a company’s future bottom line and environmental footprint. In addition, food retailers lack clear, quality data on industry and peer benchmarks to help them calibrate their transitions away from HFCs.

Fortunately, food retailers have a range of quality, independent resources available as they navigate these challenges. For more than a decade, Abt Associates has been helping the EPA run the GreenChill Partnership, a voluntary program through which EPA works with the food retail industry and affiliated stakeholders to reduce the impacts of supermarket refrigeration systems on the environment. Abt teams with EPA to collect refrigerant data from participating food retailers and then generates detailed, customized benchmark reports that show the participants how their refrigerant management strategies are impacting both the environment and the bottom line compared to their peers and the industry as a whole. Participants identify this service as one of the most valuable benefits of joining GreenChill.

GreenChill serves as an excellent model of a successful voluntary partnership program based on friendly competition between peers. The partnership has tripled in size since its creation in 2007, and the partners maintain average refrigerant emissions rates that are far below the industry average (14 percent in 2019 compared to the industry average of 25 percent). This model of using quality data analysis and benchmarking to foster friendly competition for refrigerant management could be leveraged to support efforts to reduce HFC use in other sectors as well, especially those that are closely associated with the food cold chain (e.g., refrigerated transport, warehousing, etc.) and cooling sectors.

With the expectation of future regulations on HFC production and consumption—including the United States’ likely ratification of the HFC-relevant Kigali Amendment to the global Montreal Protocol—we will likely see an increasing level of interest from the HFC end-user community in addressing their emissions. Partnerships like GreenChill can help smooth the bumps in the transition.

Focus Areas
Environment & Energy
Climate Change
Policy and Regulation
Clean Energy Solutions
Capabilities
Technical Assistance & Implementation
Technical Assistance
Regions
North America
Jump Forward
Work With Us
Ready to change people's lives? We want to hear from you.
We do more than solve the challenges our clients have today. We collaborate to solve the challenges of tomorrow.
Link