— Clark Abt
Founder, Abt Associates

Abt Associates’ history is full of groundbreaking evaluations, research, interventions, and efforts to create a more employee-friendly workplace.

Abt Associates has been an innovator since Clark Abt founded the company in a small office above a machine shop in Cambridge, Mass. in 1965. In 2014 Abt Associates kicks off a year-long commemoration of the company’s founding in January 1965. That year Clark Abt brought together 30 scientists, engineers, and educators tocreate a new kind of company that used interdisciplinary social science research to solve social and economic problems. Since then Abt Associates has focused its innovative efforts on a wide range of projects, including: 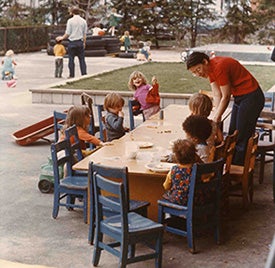 Abt also has been a leader in creating an employee-friendly corporate culture. Abt Associates in 1971 opened an employee-designed and -operated onsite day care center, the Mary Helen Gardner Children’s Village. It is one of the first corporate day care centers in New England. At the same time, Clark Abt directed an experimental women’s job corps center at Abt headquarters that trained single mothers working at Abt in computer programming, social work and other disciplines. In 1975 Abt Associates created an Employee Stock Ownership Plan (ESOP) when few others existed. Within 25 years Abt Associates became a wholly-owned ESOP S-Corporation.   Abt is commemorating its 50 years of history in a number of ways, including a March 11 panel discussion in Cambridge titled “New Directions in Social Experiments: What can U.S. and international evaluators learn from each other?”. The event featured thought leaders in evaluation from Abt Associates, Harvard University, MIT, and the University of Pennsylvania.   “Clark’s vision of people helping people is alive and well here at Abt Associates,” said President and CEO Kathleen Flanagan. “Through our broad portfolio of work, we are improving the quality of life and economic well-being of people worldwide each and every day.”