An Abt-led project in Mexico turned a burdensome task into a game that’s expected to help reduce corruption around the country.

Filling out lengthy government surveys doesn’t rank highly among anyone’s favorite tasks – even those who work in the government.

But turning these tasks into a contest – complete with prizes – incentivizes participation and speed, as one Abt Associates-led project in Mexico is proving.

The Abt Associates-led USAID Mexico Economic Policy Program’s (MEPP) cornerstone goal is to reduce corruption and boost transparency at all levels of Mexican government. 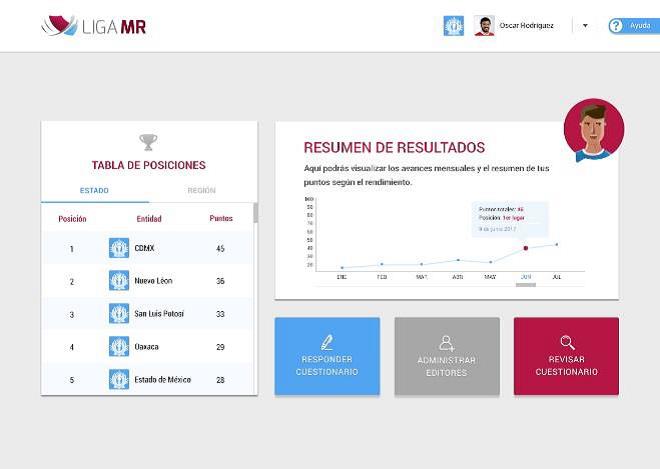 City and state government officials sign into their survey accounts, where they can review material, respond to questions, and see their rankings against other government officials. MEPP needed to gather vital data about regulatory policies in Mexico’s 32 states. But the project faced a formidable task: Polling state and municipal government employees with a lengthy survey, an unappealing prospect for civil servants who would have to research and validate the information.

MEPP devised an inventive idea to overcome survey resistance: Pitting civil servants against each other in a competitive game to win prizes, and ultimately, strengthen public sector accountability.

In this gamification strategy, competitors win points for answering questions with both speed and accuracy and play for real prizes, such as free enrollment for one official in each of five states in a virtual master’s program on regulatory improvement.

MEPP followed iterative User Experience (UX) principles to design the survey, including extensive prototype testing of survey questions – such as content, language, and sequence – and platform functionality to validate the tool’s user-friendliness and the willingness of participants to spend time on the application. COFEMER validates survey answers.

In June 2017, MEPP and its local partner, the Center for Private Sector Economic Studies (CEESP) revised the survey based on feedback from regulatory improvement officials from several states. Then MEPP asked 14 pilot participants from four states to quantify their user satisfaction. The average score was 9.2 out of 10.

Transforming a burdensome survey into an easy-to-use, fun game with competitive stakes should speed its completion, a key step in spurring state-level adoption of LGMR. The federal government expects this to catalyze regulatory reforms that improve transparency, governance, and productivity throughout the country. LGMR also aims to standardize local discretionary decision-making, especially permit approvals, which can take as little as 30 days to more than two years, depending on the state.

On June 26, 2017, COFEMER launched the Regulatory Improvement Observatory, a virtual institution that will roll out the survey to state and municipal governments. Regulatory improvement liaisons from all 32 states, as well as an additional 32 regulatory officials from large municipalities have formally committed to completing the data-gathering process within three months.