The PMI AIRS Project is using electronic data collection and GPS on smartphones to improve the planning of indoor residual spraying and to carry out safer, easier malaria spraying campaigns.

The President’s Malaria Initiative Africa Indoor Residual Spraying (PMI AIRS) Project, led by Abt Associates, conducts detailed geographical reconnaissance before spraying to map out areas targeted for IRS, and ensure the safe transport and delivery of insecticide. The project collects information on the physical terrain, bodies of water, agricultural crops and other environmental features. However, environmental compliance officers were finding inconsistencies and incomplete reporting in geo reconnaissance when the information was collected on paper forms. 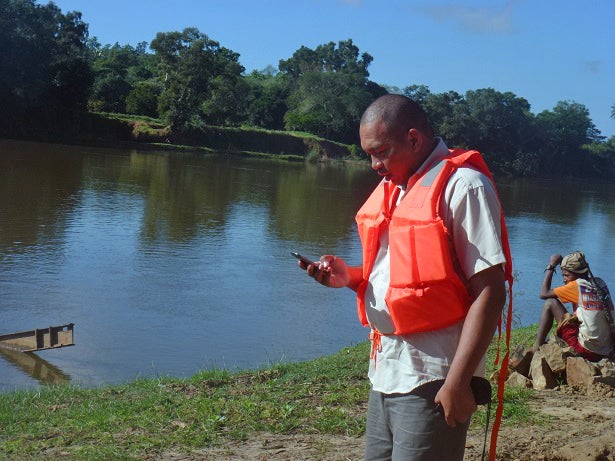 Environmental Compliance Officer Tahina Masihelison uses a smartphone to record a river crossing. Photo credit: Mijoro Rasolofomalala “Conducting geo reconnaissance on the smartphone has simplified and accelerated how we collect information in the field,” Rakotonirina said. “It also has eliminated transcription errors and double entries when transferring information from paper form to an excel sheet.”

The GPS application allows the project to identify in advance areas inaccessible by car as well as sensitive areas to avoid during spraying, such as locations near organic crops. The GPS also shows the nearest health care clinics in case of an accident.

In May 2015, AIRS Madagascar used the smartphone for geo reconnaissance for the first time in the Farafangana District. In doing so, the project reduced by half the time needed to collect and enter data. Staff reduced entry errors and gathered richer data, such as photos, GPS coordinates, and automatic date and time stamping. This allowed for more time for analysis of IRS implementation strategies and environmental compliance risk and safety.
Focus Areas
Health
Regions
Sub-Saharan Africa
Jump Forward
Work With Us
Ready to change people's lives? We want to hear from you.
We do more than solve the challenges our clients have today. We collaborate to solve the challenges of tomorrow.
Link