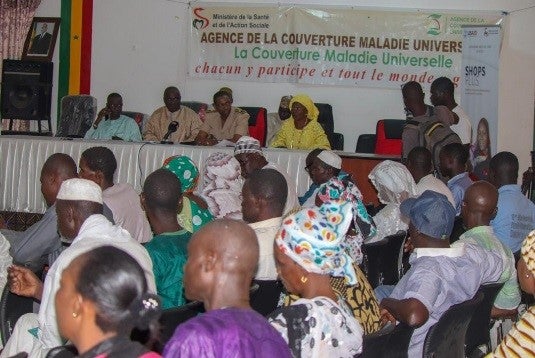 SHOPS Plus Chief of Party for Senegal Dr. Isseu Touré (center in yellow) with local ASPS and aCMU leadership at the signing ceremony in Kaolack.

USAID’s Abt-led SHOPS Plus is tackling financial barriers to health coverage and access in Senegal through a pilot centered on building a partnership between 14 community-based insurance schemes (mutuelles) and private healthcare providers in Kaolack, Dakar, and Thiès.

The first of the signing ceremonies took place in Kaolack and resulted in 124 of a total of 133 committed contracts--almost tripling the original goal of 50. Each of the 14 mutuelles in Kaolack came to an agreement that if one mutuelle decided to contract with a private provider, then each mutuelle would commit to contracting with the same provider. As a result, there were 14 times as many contracts signed as was initially anticipated.

Although Senegal has more than 2,500 private health providers that deliver substantial amounts of care, most of them do not participate as contracted providers with the more than 600 mutuelles operating in the country. This means that clients of mutuelles typically must pay out of pocket to access care from private providers, creating a barrier to accessing a key part of the country’s health system.

Director general of the National UHC Agency, Dr. Bocar Mamadou Daff, speaking with the media during the signing ceremony in May.

To address this challenge, SHOPS Plus facilitated a framework agreement between two national stakeholders: the Private Sector Alliance (ASPS) and the Ministry of Health Universal Health Coverage Agency (aCMU). The agreement formalized a public-private partnership that aims to reduce financial barriers to health care, support universal access to health coverage, and ultimately improve health outcomes for the people of Senegal. With this high-level commitment in place, the project worked with ASPS and aCMU to facilitate subsequent agreements regarding tariffs and other contracting terms between private providers and mutuelles in the three pilot departments.

The idea for the pilot stemmed from research conducted in 2017 when SHOPS Plus, working closely with Health Systems Strengthening Plus, another Abt-led USAID program, explored how private providers could help expand population coverage in mutuelles, and mitigate persistent bottlenecks in service delivery. This activity documents results and lessons learned to share with local stakeholders and the global health community. These findings will help inform future contracting efforts by mutuelles as part of a larger strategy not only for Senegal but for other countries that are looking for sustainable solutions for universal health coverage.