A PMI AIRS Project study published in the Malaria Journal finds the first step to managing insecticide resistance is monitoring its spread.

Since the President’s Malaria Initiative (PMI) launched in 2005, the number of malaria control interventions across sub-Saharan Africa have increased dramatically – with significant impact. Between 2000 and 2013, the estimated number of total malaria cases declined from 174 million to 163 million, while the estimated malaria mortality rate in children under five decreased by 58 percent in the Africa region, according to the World Health Organization.

Much of this progress can be attributed to indoor residual spraying (IRS) and long-lasting insecticide-treated nets, key components of PMI’s strategy, as well as national malaria control strategies across sub-Saharan Africa, including that of the Abt Associates-led PMI Africa Indoor Residual Spraying (PMI AIRS) Project. 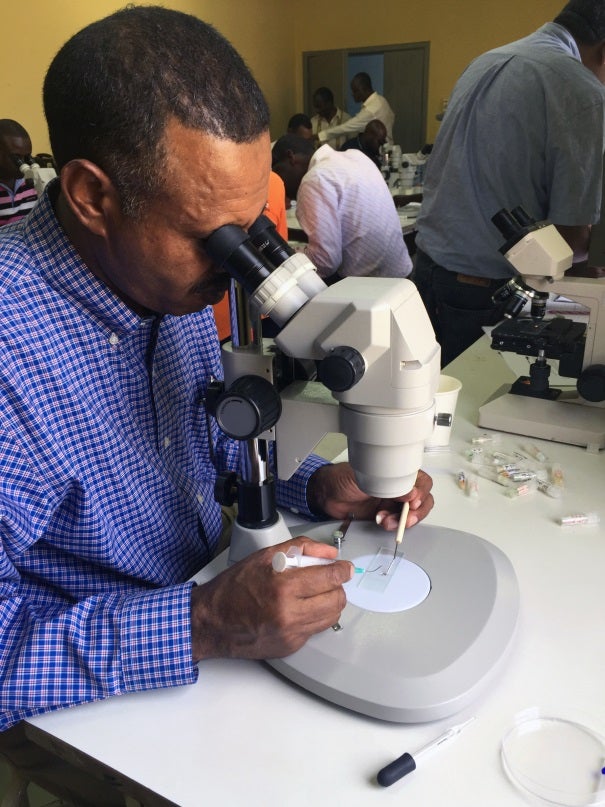 Dereje Dengela, PMI AIRS Technical Lead and entomologist, uses a microscope to identify mosquito species in Ethiopia.
Photo credit: Pamela Dasher, Abt Associates Mosquito insecticide resistance is growing, however, which threatens the impact of malaria control strategies and other efforts to contain the spread of the disease. This rapid spread of this resistance across Africa appears to be related to extensive use of insecticides in agriculture and the scale-up of insecticide-based malaria control during the past decade.

PMI AIRS field entomologists use a variety of methods to collect mosquitoes for entomological monitoring, including a mosquito aspirator, which operates like a vacuum.
Photo credit: Pamela Dasher, Abt Associates

In Mali, the PMI AIRS Project, led by Abt Associates, assessed the level of insecticide resistance in Anopheles gambiae s.l. mosquito populations, the primary malaria parasite-carrying vector in the country, against four classes of insecticide recommended for IRS. The study, which characterizes the insecticide resistance of Anopheles gambiae in Mali, was published in August 2015 in the Malaria Journal.
The journal article shows that these mosquitoes are increasing their resistance to multiple insecticides and recommends resistance management strategies based on routine monitoring to inform insecticide-based control of mosquitoes carrying the malaria parasite in Mali.

PMI AIRS collects baseline data on mosquito density, longevity, and behavior prior to the start of spraying in all project countries, both in intervention and comparable villages not receiving IRS. The project also conducts an insecticide resistance test after every spray round to monitor change in the status of mosquitoes and inform selection of insecticides for the following year.

“Entomological monitoring and reporting are an important part of the PMI AIRS Project,” said Dereje Dengela, PMI AIRS Technical Lead and entomologist. “The project monitors seasonal changes in mosquito density and their resting habits and uses this information to maximize the impact of IRS.”
Focus Areas
Health
Regions
Sub-Saharan Africa
Jump Forward
Work With Us
Ready to change people's lives? We want to hear from you.
We do more than solve the challenges our clients have today. We collaborate to solve the challenges of tomorrow.
Link