Abt Associates is working as part of a consortium to evaluate efforts to discourage Cambodian families from sending their children to for-profit orphanages.

Cambodian orphanages – also known as Residential Care Institutions (RCIs) – market themselves as opportunities for parents to give their children a quality education, higher standard of living, and a better future. Consequently, many vulnerable parents send their children to RCIs, even if they are not orphans. In 2014, approximately 77 percent of children in RCIs were not orphans, and most of them came from vulnerable households.

However, RCIs operate a profitable business model — supported in part by well-meaning foreign donors — in which children often receive sub-standard care, face higher risks of abuse, and are separated from family support.

Tulika Narayan, Ph.D. USAID is working to change perceptions of RCIs through the USAID Family Care First (FCF) Cambodia initiative. Abt Associates is conducting rapid-cycle evaluations of two FCF efforts: The community program aims to change Cambodian perceptions about RCIs, while the donor program aims to dissuade foreign donors from giving money and time to RCIs.

“By building in rigorous evaluations that inform programs early and rapidly about the best-performing behavior change strategies, FCF can have a greater impact in the long run on family separation,” said Tulika Narayan, Ph.D., an Abt principal associate and development economist. “Ultimately, these evaluations can also inform similar programs in other countries.”

Abt is performing these evaluations under the Rapid Feedback Monitoring Evaluation Research & Learning (RF MERL) mechanism as one four members of a consortium led by R4D. 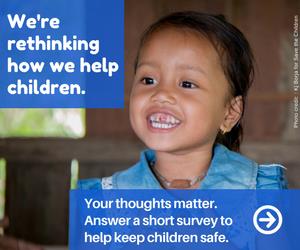 A sample Facebook advertisement to help educate potential donors on the realities of RCIs in Cambodia. This information is helping USAID understand the type of behavior change needed to alter donor perceptions. For the community program, Abt and R4D conducted formative research in 36 suburban villages in June 2017 to understand how people receive information and why families put their children in orphanages. Abt then recommended content and communication channels to a USAID-supported family support services NGO, the Cambodian Children’s Trust (CCT), which is developing a social and behavior change campaign (SBCC) to raise local awareness of RCIs.

Abt randomly selected villages to receive their typical social work model only and others to receive the social work model plus the four-month SBCC campaign. Abt will survey households in each village to assess the campaign’s relative effectiveness in changing perceptions of RCIs. If effective, CCT will roll it out in all of its villages and consider scaling it to other villages and communities in Cambodia.

For the donor program, Abt’s research indicated that most donors and volunteers are well-meaning but do not realize most children in RCIs are not orphans. Abt is testing several versions of online ads on Facebook and Google to determine the most effective message and platform for educating people about the harms of donating to or volunteering with RCIs in Cambodia.

“The goal is to identify the best performing strategy for ultimately changing donation and volunteer behavior, thereby reducing financial incentives for RCIs to recruit more children,” Narayan said.
Focus Areas
Reproductive, Maternal, Newborn and Child Health (RMNCH)
Health
Capabilities
Research, Monitoring & Evaluation
Jump Forward
Work With Us
Ready to change people's lives? We want to hear from you.
We do more than solve the challenges our clients have today. We collaborate to solve the challenges of tomorrow.
Link