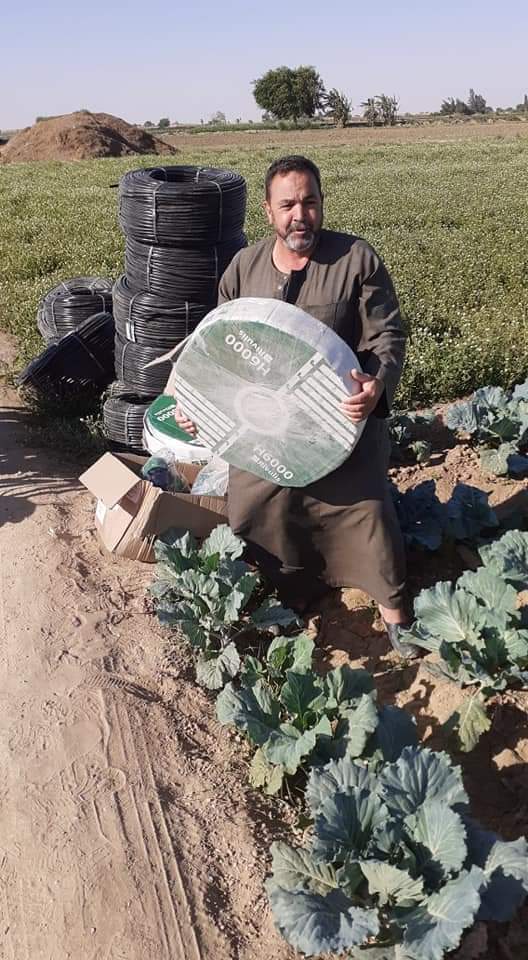 For more than 50 years, Samy El Demiry, a 62-year-old smallholder farmer, has grown vegetables on his five feddans (5.2 acres) of land in the Mostafa Ismail village in Al Amreya district, Alexandria, Egypt. With the help of his 30-year-old son, Mohamed, he cultivates a variety of vegetables, including tomatoes and bell peppers (capsicum).

Samy and other farmers in this area rely heavily on resource intensive flood irrigation to water their crops. This method distributes water over the soil surface by gravity, but as water flows over the surface of the field, a substantial volume is wasted through evaporation. The crops get more water than necessary, which means lower quality, more diseases, and ultimately lower prices. And flood irrigation requires large amounts of water—a precious and limited resource in Egypt’s arid and semi-arid regions,  especially during the summer. “Almost all the farmers here in our village use the flood irrigation method," said Samy. "It is the method we learned from our fathers, and it was passed on from one generation to the next."

To help farmers conserve this important resource and at the same time improve the quality and productivity  of their crops, the Feed the Future Egypt Rural Agribusiness Strengthening Project, funded by USAID and implemented by Abt Associates, reached an agreement with Agro Egypt—a leading company in agricultural supplies and irrigation systems—to pilot poly-pipe irrigation technology in the Mostafa Ismail village. After a demonstration on June 6, the Project supervised company engineers as they installed the new irrigation system on Samy’s one and a half feddans of bell peppers. This was the first poly-pipe irrigation system installed in Egypt.

Poly-pipe irrigation is an innovative, low-cost alternative to flood irrigation systems, with the potential to lessen farmers’ costs, increase quality, productivity and therefore income, and contribute to overall climate resilience efforts by decreasing water use. With this system, farmers can adjust water flow on a seasonal basis and manage the distance between gates to meet the spacing and water requirements of various crops. The efficient poly-pipe technique uses 50 percent less water than flood irrigation. Poly-pipe irrigation is also cost effective as it is half the price of other types of drip irrigation systems, and the Project has facilitated low-interest loans to smallholder farmers to purchase poly-pipes.

The Project's long-term goal is to facilitate the transition to efficient irrigation technology for approximately 50,000 feddans owned by smallholder farmers. “Although we are still in the early stages, I can already see some encouraging signs… My whole village has heard about the poly-pipe technology,” Samy said. “They are all excited to start implementing this technique on their own land. Hopefully, soon enough, every field in Mostafa Ismail village will be using poly-pipes.”